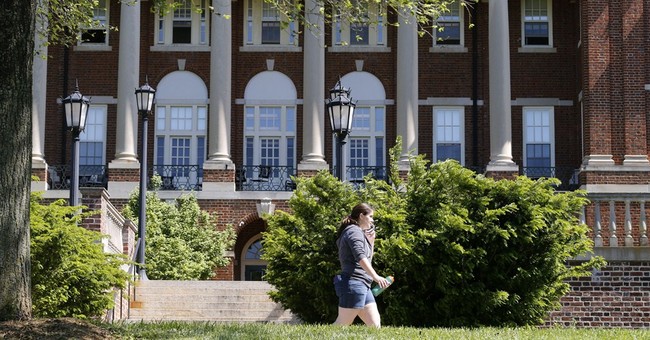 Too many college-age kids are unable to care for their most basic needs, which doesn't bode well for my future.

Peter Gray, Ph.D., a research professor at Boston College, writes in Psychology Today that increasing lack of resilience among today's college kids is causing educators all kinds of problems.

"Students are increasingly seeking help for, and apparently having emotional crises over, problems of everyday life," he writes.

He cites some worrisome examples.

At one major university, emergency calls to the counseling department more than doubled over the past five years.

In one case, a female student felt traumatized because her roommate had called her a "bitch."

In another case, two students "sought counseling because they had seen a mouse in their off-campus apartment" - after they panicked and called the police, who set a mousetrap for the startled students.

Such needy students are forcing faculty to do more hand-holding, and to lower academic standards, so as to not challenge the fragile little nitwits too much.

Because if professors do challenge them, the whiners will go to online professor-rating sites and give the professors lousy reviews.

Where did this unresilient, needy generation come from?

Gray says it is rooted in the way children are being parented over the past few decades and the decline in "children's opportunities to play, explore, and pursue their own interests away from adults."
CARTOONS | Gary Varvel
View Cartoon

These kids were raised in an era when everyone gets a trophy and a star on their forehead - regardless of effort or results. They are accustomed to their "helicopter parents" solving all of their problems.

"We have raised a generation of young people who have not been given the opportunity to learn how to solve their own problems," writes Gray. "They have not been given the opportunity to get into trouble and find their own way out, to experience failure and realize they can survive it, to be called bad names by others and learn how to respond without adult intervention."

"Young people, 18 years and older, going to college still unable or unwilling to take responsibility for themselves, still feeling that if a problem arises they need an adult to solve it," writes Gray.

It's bad enough that so many of today's unresilient, needy, gritless kids are woefully unprepared to support their own future, but what's worse is that they're not going to be able to support mine.

Consider: Our government has racked up $18.2 trillion in debt. The Congressional Budget Office says that in a few years, entitlement costs are going to soar. We either cut the bejeezus out of government spending or ratchet taxes way up.

Regardless, a reckoning is coming and it is going to be ugly. Today's college kids are likely to experience runaway inflation, higher taxes and, as a result, an anemic economy that will make it even harder for young people to get jobs and pay their considerable bills.

See, after years of being taken - busting my hump as a self-employed writer for the pleasure of cutting big, fat checks to the IRS - I have plans to become a taker. I hope to retire in 15 years, pay zero taxes and sit back fat and happy, collecting Social Security and Medicare benefits.

How will I rely on today's pampered college nitwits who panic and call the cops when a lousy mouse is in their off-campus apartment?