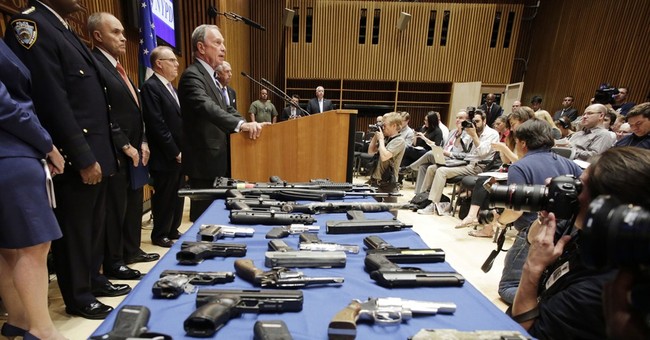 During my last visit to New York City, I stumbled into an unexpected discussion about its restrictive gun polices.

The discussion occurred after I ducked into a coffee shop. The place was empty except for three transit employees.

“I don't know why the kid shot me,” said one of the men. “But I got myself some protection now.”

Curious, I introduced myself and asked the fellow about his story.

“One day three years ago,” he said, “I'm sitting in my Brooklyn neighborhood in my 2008 Lincoln, eating a sandwich.

“This kid comes up to the passenger side and tells me how nice my car is. A lot of people compliment my ride, so I think nothing of it.

“I tell the kid I don't want no trouble. I open the door to start getting out. But then I make a big mistake. When he reaches through the window to grab my keys, I grab the keys before he can get them.

“He says, ‘I'm gonna pop you, man!' I look into his eyes and they're black as death. Then BOOM!

“The next thing I know, I wake hooked up to all kind of wires in the hospital and the doctor is telling me how lucky I am. The bullet hit me in the right shoulder and passed out the left armpit — just missing my heart.

I was spellbound by his story and the matter-of-fact way he told it, but his story grew more fascinating when he told me how he now is breaking the law to protect himself and his family.

“In New York,” he said, “the gun laws are so strict, the majority of people who have them are the criminals. Maybe if you're a small-business owner or have some other valid reason for protecting yourself, you might get a permit to carry. But if you're a regular guy like me, forget about it.

“But I live on the Brooklyn-Queens border, and in that part of town there's only one way to protect yourself — you got to let the punks know you're packing heat.

“So I bought myself a street gun that I carry with me everywhere. Lots of the decent people in my neighborhood are carrying illegal guns. It's the only thing we can do.”

The fellow knew what he was talking about.

A Cato Institute study found that 60 percent of criminals would not attack if they knew a potential victim were carrying a gun.

In New York City, though, it's the criminals, not the innocent civilians, who are often armed. Of the estimated 400,000 illegal guns that flood the city, most are in the hands of the criminals.

Thus, if you can't get a permit to carry — which is difficult to do in New York — and you choose to arm yourself for personal protection, you become a criminal.

“What if you use an illegal weapon to shoot someone who tries to shoot you or steal your car?” I asked the transit worker. “Won't you face charges yourself?”

“Maybe so,” he said, “but at least I'll be around to do the explaining.”

Portland Begs People to Come Back to the City After Months-Long Riots, Rising Crime
Townhall
Anti-racist workshop teaches University of Oklahoma instructors how to clamp down on students who might start to think independently [video]
Twitchy
Candace Owens and Brandon Tatum Are Not Who They Pretend to Be
Redstate
Republicans Pounce on Gay Pride Parade Attack, Bad Reporting
PJ Media