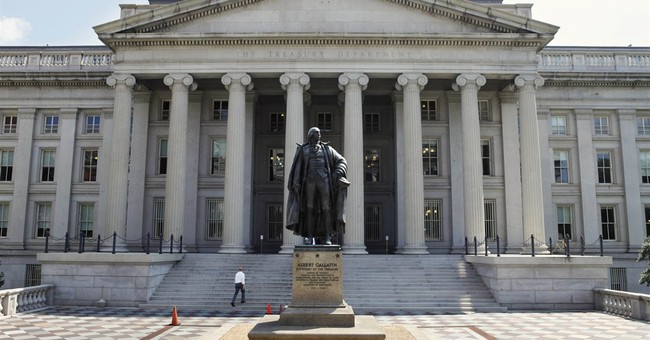 I don't know who they are, but I've got to hand it to them. I'm too cynical to do what they do.

I speak of the Americans who, every year, donate money to pay down America's national debt.

The Bureau of the Public Debt — part of the Treasury Department — began allowing such donations in 1961. According to Title 31, Chapter 31 of the U.S. Code, any citizen is free to give a “gift” to Treasury, under the condition that the money will be used only to pay down the debt.

Last year, the government received $3 million in such gifts. Who are the gift-givers? Nobody knows for certain.

Mckayla Braden, senior adviser at the Bureau of the Public Debt, told me that all the bureau does is tally the totals. It keeps no records on the number of individuals who give or the average amount.

Braden was able to share some interesting details and anecdotes with me:

• Gift-givers generally mail in checks — rarely do they include a note of any kind.

• Sometimes they donate their tax-refund checks, after signing the checks over to Treasury.

• Occasionally, someone leaves a large portion of his or her estate to the government. That happened in 1992, when the largest gift on record, $3.5 million, was received.


Over the years, Braden was able to learn about some of the givers.

In the early '90s, a teacher sent in a large jar of dimes and nickels. The teacher explained that she'd conducted a class exercise on the national debt. Her students had contributed what they could.

Braden remembers one gift-giver who mailed a small money order from a convenience store.

She remembers another fellow who mailed in $10 or $20 every payday. He did so for years.

Though little is known about the gift-givers — it isn't entirely clear what motivates them — Braden got a sense that most are patriotic people who want to do their own small part to help their country.

“Small” is, unfortunately, the right word.

For the past decade, Treasury has received between $2 million and $3 million in gifts every year. But our debt, growing a few trillion a year, now stands at about $17 trillion.

If our debt remained fixed at $17 trillion — and if we applied $3 million every year to pay down that debt — it would take 5.6 million years to pay it off.

And that is with zero-percent interest.

Besides, the gift donations technically aren't paying down the debt anyhow. All the donations are deposited to the receipts ledger of Uncle Sam's general fund.

Since we're running large deficits, the donations simply reduce the amount of money our government will borrow.

The last thing I want to do is give our spendthrift government an opportunity to spend even more.

Nonetheless, I wish more people were as thoughtful as the silent givers — particularly the people who are so eager to expand our government and raise our taxes.

Hey, big spenders, here's your chance to put your money where your mouth is. You can send your own money to Treasury right now. Just go to www.pay.gov.

How about it, big spenders.

Just as I figured.

No wonder I'm such a cynic.

Editor's Note: This column is an excerpt from Tom Purcell's new book, "Comical Sense: A Lone Humorist Takes on a World Gone Nutty!" available at amazon.com.