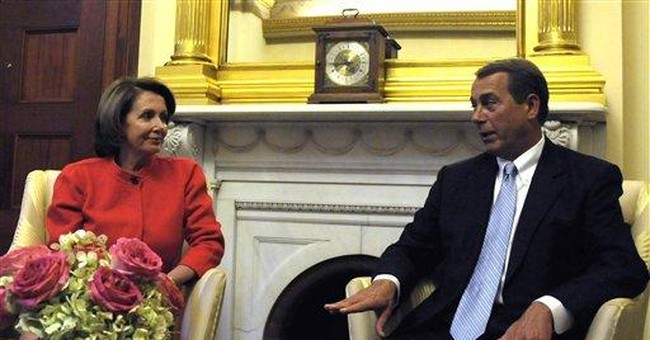 One of the few bright spots on the American political map right now for Republicans is, perhaps surprisingly, the House of Representatives.

Once the source of the Republican Party’s (and the conservative movement’s) powerbase in Washington, the House is now the institution in which conservatives hold the least actual legislative power. Because of the legislative rules, majorities in the House possess somewhere between 99 and 100 percent of the institutional power of the place. While Republicans still hold the White House and can still hold their own as a Senate minority, Democrats should, under the rules, be more than able to impose their will in the people’s House.

And yet, Minority Leader John Boehner (Ohio) and his conference just concluded what was possibly the most successful legislative year for a minority party in memory. Democratic Speaker Nancy Pelosi (Calif.) and her team controlled the agenda, but on issue after issue, they could not control the floor. The Republicans united and not only beat back the most extreme, liberal bills and amendments, but they largely defined the parameters of debate as well. It really was a sight to see, but like all political successes, the House Republicans’ tremendous 2007 session only now increases the expectations and responsibilities for 2008. Now that House Republicans have merited a second look by American voters desperate for positive, principled leadership, they have a responsibility to provide it.

I believe that House Republicans, having shown they have quickly mastered the improved tactics of a minority party, need to break tradition and reassert the strategies of a majority coalition. While Speaker Pelosi will no doubt offer Republican members and candidates plenty of bad ideas to bat down, Republicans can retaliate by offering and demanding a hearing for their good ones. They can use their strategic successes to give the American people a vision of what a Republican Congress would look like, how they would govern differently than the current crowd, and why their ideas truly speak to the problems our nation faces.

Every flawed policy that comes out of the Democrats’ committees can and should be countered with a vigorous, sharply contrasted alternative. Democrats in Washington remain the only people in the country who still believe the war in Iraq is lost and that the surge has failed. Their words and votes should be used against them, and Republican leaders should produce and demand votes on legislation to extend the American people’s moral and material support for the surge strategy, Gen. David Petraeus and our troops. Let all Americans at home and fighting abroad know that the Republican Party is the party of victory.

When the Democrats come forward, as they surely will, with another tax hike this year — like the $15 billion they tried to skim off the top of domestic energy companies last year — Republicans should do more than just fight it off (though they should do that, of course). They should in addition propose sweeping legislation to scrap the current tax code and the odious Internal Revenue Service and enact a flat, fair and fundamentally reformed system.

As Democrats cook up dozens of new and unnecessary things for government to do, Republicans should counter with specific plans to make the government finally do the things it’s supposed to do. When Democrats inevitably try to turn the president’s stimulus package into a spending bill for their special interests, conservatives should come back with a stronger plan that highlights our economic principles. If you can’t pass bills, you might as well do what worked in our 12 years in the majority — start the debate on these bills from the far right, making it more difficult for Democrats to argue on their limited principles and alter the practice.

Other agenda items that bring our constitutional principles to the forefront are in desperate need of legislative debate. To remind Americans of the sweeping consequences of the next election, the judicial junta running much of the country now should be brought to the fore, and brought to heel. Republicans could develop and promote — both externally and internally via discharge petitions — legislation to break up the out-of-control 9th Circuit Court of Appeals, to strip courts of their jurisdiction over political issues like homosexual marriage and publicize federal judges who unconstitutionally base their decisions on foreign law. The battlefield of the so-called culture war is always shifting, and conservatives need leaders on every front.

Leaders aren’t afraid of their ideas. Congressional Democrats, on the other hand, are. They refuse to offer a unified agenda on anything. Think fast: What’s the congressional Democrats’ position on the war on terror, immigration, taxes and the economy, the culture wars, or government reform? They don’t have one because (a) they don’t think their constituents deserve to hear one from them and (b) they know their real values are diametrically opposed to the American people’s.

To win, Democrats feel they have to hide. Republicans should harbor no such fears; their path to victory is relatively simple: Let the Party of Principles rely on them once more.