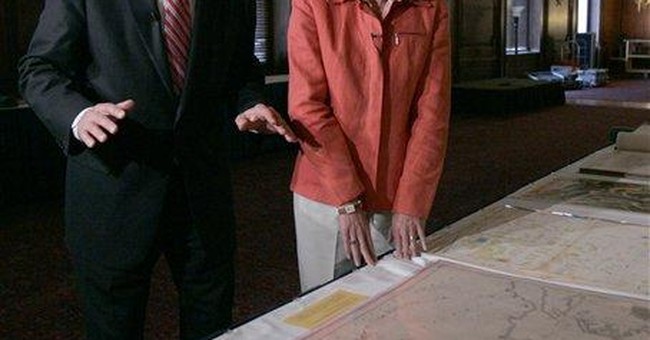 Next week, the Senate will determine whether it sides with “we the people” or if our elected “representatives” support a drastic expansion of government that will trample our liberties for no measurable environmental benefit.

On June 10, the Senate is expected to vote on a resolution offered by Senator Lisa Murkowski (R-Alaska) that would block the Environmental Protection Agency (EPA) from regulating carbon dioxide emissions under the Clean Air Act.

If Congress does not step in to block EPA, the agency can use the Clean Air Act as a blunt tool to widen its jurisdiction into almost every nook and cranny in our lives. Every sector of our economy -- transportation, power generation and manufacturing -- would be subjected to EPA’s bureaucratic reach.

Indeed, every business that uses fossil fuels to heat, cool, light or run its manufacturing operations or emits greenhouse gases would need permits from EPA to function.

Ironically, even EPA recognizes that the size and scope of this regulatory monstrosity is too much for it to handle. Accordingly, the agency was forced to issue a “Tailoring Rule” to initially exempt facilities that emit less than a threshold level of greenhouse gases for six years.

Unless the scope of the regulatory scheme is limited, EPA readily acknowledges that agencies involved in the permitting process would be overwhelmed with applications. For example, EPA says, “state permitting authorities would be paralyzed by permit applications in numbers that are orders of magnitude greater than their current administrative resources could accommodate.” EPA estimated it could cost over $15 billion to process just one type of permit nationwide.

Now we are being treated to the bizarre, and legally questionable, spectacle of EPA trying to limit its authority under the Clean Air Act, because it knows its own regulatory scheme is unmanageable.

From a Constitutional perspective, it’s the role of our elected representatives to impose such a far-reaching regulation legislatively, and not to allow a rogue executive branch agency such as EPA to do so administratively. Elected officials can be held accountable for their deeds; bureaucrats cannot. If lawmakers truly believe that global warming is worth wrecking the economy, then let them stand up and be counted.

Enter Lisa Murkowski. The Congressional Review Act – the law Murkowski is using to block EPA – was passed to address such an outrageous power grab. It gives Congress an opportunity to review and if necessary overrule a regulation by passing a joint resolution. To take effect the resolution would need to pass both the Senate and House of Representatives and is then signed by the president.

A simple majority of 51 votes is needed to pass the Senate, and the vote is expected to be very close.

Given the troubled state of our economy and public concern over the growth and intrusion of government in our lives, one might think the politics favor strong support for passage of the resolution.

Yet blocking EPA is not a slam dunk. California Senator Barbara Boxer (D) is leading the charge to defeat Murkowski’s effort. Opposition from Boxer is not surprising especially since Obama and the other progressives want to use the threat of EPA regulation to force industry to the cap-and-trade bargaining table.

Given the choice of regulatory death by EPA or cap-and-trade, industry will take their chances with bargaining with legislation in the hopes of getting the better deal.

What is surprising, however, is that Massachusetts Senator Scott Brown (R) has not yet expressed support of the resolution. Brown, whose election was propelled by Tea Party activists, should oppose EPA’s power grab that will significantly expand government power and burden our economy.

The late Senator Ted Kennedy, whose seat Brown won in January, was a big supporter of cap-and-trade. He liked his government as big as he could get it. Brown needs to show the world that change has truly come to Massachusetts.

Senator John Rockefeller (D-West Virginia) is from a coal-producing state but has yet to come out in support of the Murkowski Resolution. Instead, Rockefeller introduced a bill that would merely delay EPA’s regulatory onslaught for a couple of years. Some believe his bill only serves to provide political cover for himself and moderate Democrats who want to be on the record as being “opposed” to EPA but stopping well short of taking a stand for their constituents.

The upcoming vote on Murkowski’s resolution is fundamentally about our representative democracy: Which government body determines the fate America – elected representatives or unaccountable bureaucrats?

Tea Party members and other citizens who believe in limited government and are now actively engaged in the political process will be carefully watching the Senate vote and taking names.