Todd Starnes
|
Posted: Jun 30, 2017 12:05 PM
Share   Tweet
The opinions expressed by columnists are their own and do not necessarily represent the views of Townhall.com. 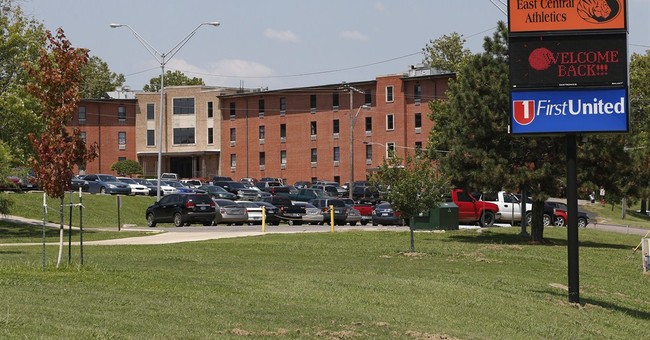 East Central University said they will remove crosses, Bibles and other religious symbols from a campus chapel to appease a bunch of out-of-town agitators.

It’s unclear when the Oklahoma school will commence with the Christian cleansing of the Kathryn P. Boswell Memorial Chapel. The chapel opened in 1957.

“We will continue to use the building as we always have, for all faiths,” ECU President Katricia Pierson said in a statement to the Ada News. “We do not want to presume to embrace one faith over another. We support all cultures and attempt to make them comfortable when they are here.”

The university’s president went on to say they are “looking at the feasibility of removing the cross on the steeple, but need to respond to the request for removal of religious icons from the chapel.”

“We are exploring options for preserving the items,” she said.

So on the bright side, it appears East Central University will not burn the Bibles or toss the crosses into a wood chipper.

Americans United for the Separation of Church and State is responsible for the Christian cleansing at ECU. They fired off a terse letter accusing the school of displaying “religious iconography.” That letter was obtained by the Ada News.

“These displays include Latin crosses on the top of and inside the building, Bibles and a Christian altar,” the letter stated. “While it is legal for a public university to have a space that can be used by students for religious worship so long as that space is not dedicated solely to that purpose, it is a violation of the Establishment Clause of the First Amendment to the U.S. Constitution to display religious iconography on government property.”

Hiram Sasser, director of litigation for First Liberty Institute, said there is federal precedent to maintain chapels in taxpayer-funded facilities.

“They want to see if he backs down or stands up to their ridiculous claims and I predict Mike Hunter will fight hard to preserve this historic chapel,” Sasser said.

Meanwhile, many Oklahomans are furious over the university’s decision to capitulate to those who want to eradicate Christianity from the public marketplace.

“I feel betrayed by our own country, upset that this could take place in America,” alum Jill Tucker Brown told me. “We are a nation founded on Christianity.”

Ms. Brown believes the university should stand up to the atheist and secularist bullies.

“I think it is absurd that anyone would go to this length (to remove the cross),” she told me. “If this university does not stand up for their rights, this will not be their only fight.”

Anita Thomas is also a graduate of East Central University and she is heartbroken over the news.

“I am heartbroken because our country has become a place where things like this can happen,” she told me. “

Much like the Islamic radicals, the atheists and secularists want to erase Christianity from the public marketplace. And they are waging their cultural jihad not with bombs – but with lawsuits.

As I wrote in “The Deplorables’ Guide to Making America Great Again,” it is time for patriots to mobilize and fight back. Appeasement is not the answer.

First,  contact the university’s president and politely voice your opinion. Second, contact Oklahoma Attorney General Mike Hunter and urge him to fight back against this godless scourge. And finally, the university’s alumni should immediately halt all funding.

If they remove the cross from the chapel – we should remove “In God we Trust” from their bank account.