Would Baseball Team Have Mocked Tebow’s Religion Had He Been a Muslim?

Todd Starnes
|
Posted: Jun 22, 2017 12:15 PM
Share   Tweet
The opinions expressed by columnists are their own and do not necessarily represent the views of Townhall.com. 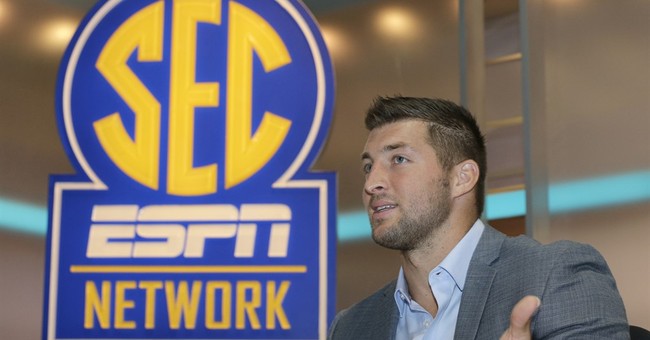 The Charleston RiverDogs are in the doghouse with baseball fans after they incessantly mocked the Christian faith of Columbia Fireflies outfielder Tim Tebow.

“While we believe that our promotions were poking fun at Mr. Tebow’s celebrity status rather than his religion or baseball career,  our intent was not to offend anyone, and for the fact that we did offend, we are sorry,” general manager Dave Echols wrote in a statement to The Post and Courier.

Tebow, a devout Evangelical Christian, was in Charleston last weekend for a three-game series with the minor league ball club. The Fireflies are the Class A affiliate of the New York Mets.

Every time Tebow came to bat, the “Hallelujah Chorus” was played over the public address system. The Riverdogs’ mascot wore eye black inscribed with “John 3:16” and was filmed “Tebowing” on the field. Click here to watch.

You might recall during Tebow’s football career at the University of Florida, he would strike a prayerful pose on the sidelines that became known as “Tebowing.”  He was roundly criticized by godless liberals for writing “John 3:16” in eye black during his gridiron days.

Echols acknowledged some of the promotional activities “were in poor taste.”

Some called the RiverDogs antics trolling, others called it mocking and some called it downright disrespectful.

“I guess my comment would be that it was all very minor league,” he said.

“Guy brings in the three biggest crowds of your year and you mock him relentlessly including his religion? Classless!” one fan wrote on Twitter.

“So they are proud of showing disrespect and bullying. This team may have won the game but they have lost much more. They arereal losers,” tweeted another. “I am from Charleston and it is not what my home town is about #VeryPoorRiverDogs.”

I’ll admit that I chuckled a bit over the “Hallelujah Chorus” bit – but it does appear the Charleston ball club crossed the line. Still, I think they deserve a measure of grace.

I suspect many of the RiverDogs are good, church-going folks so I doubt they meant to offend people of faith. I take the general manager at his word when he said it was nothing more than good-natured ribbing.

But I wonder if they would’ve been so eager to mock Tebow’s faith – had he been a Muslim?