Todd Starnes
|
Posted: Jun 08, 2017 11:50 AM
Share   Tweet
The opinions expressed by columnists are their own and do not necessarily represent the views of Townhall.com. 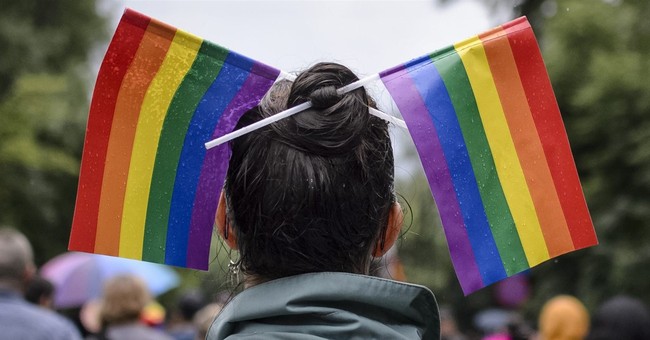 Those who preach tolerance and equality are normally the least tolerant and least equal of all.

That’s why I was not terribly surprised to learn from Fox 46 that organizers of a gay pride parade in Charlotte, North Carolina banned a group of pro-Trump gays.

“Gays for Trump” had submitted an application to display a float during this year’s Charlotte Pride parade.

“It was going to support Donald Trump,” group spokesman Derek Van Cleve told me. “It was going to be a patriotic float with American flags and a few ‘Make America Great Again’ flags.”

He also said the float would be populated with a number of drag queens – dressed as Uncle Sam and the Statue of Liberty.

“We wanted to have a couple of drag queens on the float dancing in ‘Make America Great Again’ dresses,” he said.

“Not every single lesbian, gay, bisexual or transgender citizen is anti-Trump,” he said. “Some of us love him and some of us support him – including myself.”

Mr. Van Cleve told me he was surprised when Charlotte Pride rejected their application.

To be clear, the organization did not explain why they rejected the “Gays for Trump” entry.

However, a spokesperson for Charlotte Pride issued a statement to Fox 46 defending its right to “decline participation at our events to groups or organizations which do not reflect the mission, vision and values of our organization.”

“In the past, we have made similar decisions to decline participation from other organizations espousing anti-LGBTQ religious or public policy stances,” the statement read.

Charlotte Pride went on to say they envision a world in which “LGBTQ people are affirmed, respected and included in the full social and civic life of their local communities, free from fear of any discrimination, rejection, and prejudice.”

It’s just unfortunate that Charlotte Pride does not practice what it preaches.

"For a group of people to claim to want tolerance, acceptance, and give it to every single person you can imagine to give it to, for them to sit back and judge me for exercising my right as an American to choose my leader without judgment is hypocritical," Gays for Trump organizer Brian Talbert told Fox 46.

Mr. Van Cleve told me there’s not all that much diversity in the local LGBT organization.

“I’ve been to many pride festivals in the past and it’s pretty much a big DNC convention,” he said. “It’s extremely liberal.”

Charlotte Pride has a right to pick and choose who they wish to parade with – that issue is not in dispute.

But their decision to ban “Gays for Trump” smells of narrow-minded political bigotry.

Charlotte Pride should be celebrating diversity. Instead, it appears they are shoving gay Republicans back into the closet.