Todd Starnes
|
Posted: Dec 29, 2016 4:31 PM
Share   Tweet
The opinions expressed by columnists are their own and do not necessarily represent the views of Townhall.com. 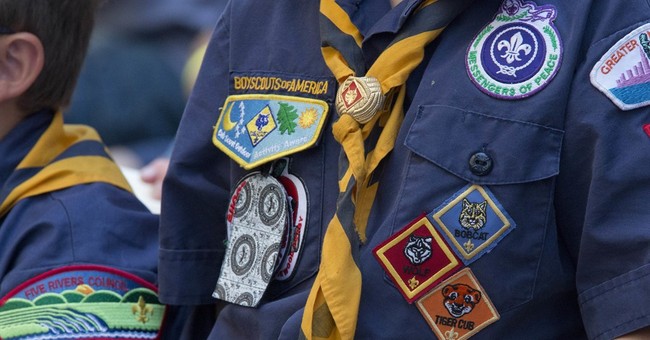 The Cub Scouts are facing a transgender controversy after an eight-year-old born a girl but who identifies as a boy was asked to leave a New Jersey pack.

Several readers alerted me to this story from Secaucus, New Jersey. Before I get into the heart of the issue, I want to explain why I have chosen not to identify the parent or the child.

I find it reprehensible a grown woman would parade her child in front of the national media to advance some sort of cultural agenda. This parent is sacrificing her child’s privacy and innocence for 15 minutes of fame. And I refuse to give the woman the satisfaction of reading her name in print.

The eight-year-old, who had been a member of the scouting group for about a month, was kicked out of Cub Scout Pack 87 because she is transgender. Local news accounts indicate an unknown number of parents were upset their sons were in a scouting group with a girl who identifies as a boy.

“How dare they judge me?” the child told The Record newspaper. “I don’t have to explain it. It’s the way I’m born.”

The New York Daily News reports it may be the first case of a child being prohibited from participating in scouting activities because of gender identity.

But the Boy Scouts of America defended the child’s ouster, pointing out to the newspaper the “child does not meet the requirements to participate in this program.”

“It made me mad,” the child told The Record. “I had a sad face, but I wasn’t crying. I’m way more angry than sad. My identity is a boy. If I was them, I would let every person in the world go in. It’s right to do.”

The mother of the ex-Cub Scout told the newspaper she first thought her child was a tomboy “because he liked climbing trees and digging in dirt to look for worms.”

“But she said she knew it was more than that by the time he was 5 and she began reading about what it means to be transgender,” the newspaper reported.

Last year, the mother allowed the child to “come out as a boy” and get a short haircut. The Record published an editorial calling for the Boy Scouts to reverse its decision.

“There should be some common sense applied here with regard to an 8-year-old. (Name omitted) wants to be a Scout. He identifies as a boy. There should be no need for litigation or years of court battles. He should just be allowed to be a Scout,” the newspaper wrote.

Sooner rather than later, I suspect the Boy Scouts may face a legal challenge over its transgender policy. And the Boy Scouts will face further controversies when they are forced to confront non-binary scouts, gender-fluid scouts and genderless scouts.

The Girl Scouts already allow boys who identify as girls to sell Tagalongs and Thin Mints.

So do not be surprised if the Boy Scouts of America capitulate. They've already done it once before – sacrificing their long-cherished values on the altar of tolerance and diversity.

That's why so many families are getting involved in organizations like American Heritage Girls and Trail Life USA. Both are faith-based scouting organizations built on a firm spiritual foundation.

Trail Life USA was founded in 2013 in the aftermath of the BSA’s decision to forego their core values for the sake of political expedience. Since then, they have experienced explosive growth – with more than 26,000 members.

I believe organizations like Trail Life and American Heritage Girls help will raise up a new generation of good citizens and patriots – young men and young women who will do their duty to God and country – a generation that is physically strong, mentally awake and morally straight.