Todd Starnes
|
Posted: Apr 13, 2016 1:30 PM
Share   Tweet
The opinions expressed by columnists are their own and do not necessarily represent the views of Townhall.com. 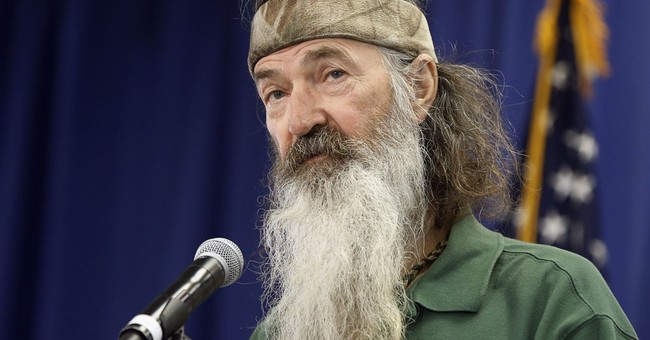 My good buddy Phil Robertson has drawn the ire of a bunch of Jesus-bashing, liberal lug nuts after he petitioned the Lord during a NASCAR invocation to put a “Jesus-Man in the White House.”

Brother Phil delivered the pre-race invocation on April 9th at the Texas Motor Speedway’s Duck Commander 500. And it was a mighty fine invocation, indeed.

“I pray Father that we put a Jesus-Man in the White House,” he prayed. “Help us do that and help us all to repent, to do what is right, to love you more and to love each other. In the name of Jesus I pray, amen.”

Brother Phil also mentioned the Bible, guns and thanked the Good Lord for the United States military – just like any good church-going, Christian man would do.

But the Duck Commander’s heartfelt invocation caused the Mainstream Media to blow a collective head gasket.

Sports commentators and journalists suggested pre-race prayers were too “Southern” and too “redneck.” As if there’s something wrong with being a Southern-fried redneck?