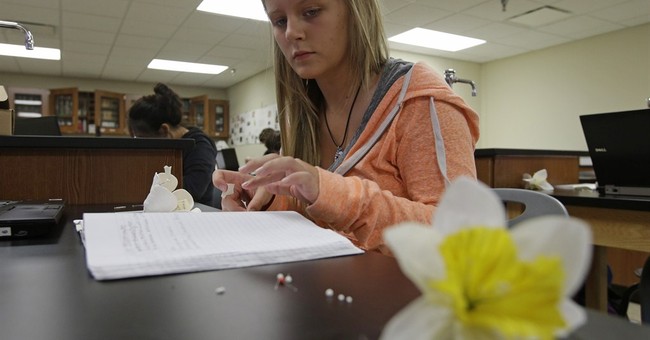 Editor's Note: Some language in this column may be offensive to readers.

“She could feel his erection, hot against her stomach.”

It’s not exactly Nancy Drew but that’s the kind of sexually graphic content freshmen boys and girls are being exposed to at New Hampshire’s Gilford High School – without their parent’s knowledge.

“’Yeah,’ he groaned, and he pushed her thighs apart. And then suddenly Matt was inside her, pumping her so hard that she scooted backward on the carpet, burning the backs of her legs.”

That’s an excerpt from “Nineteen Minutes,” a novel that 14-year-old English students have been assigned to read at the local high school. It’s a story that was first reported by EAGnews.org, the website of the Education Action Group Foundation.

The novel is based on a school shooting and deals with a variety of issues ranging from bullying to sexual violence. In previous years, parents have received some sort of notification about the nature of the novel.

But this year – somebody forgot to let mom and dad know their youngsters were going to parse a literary classic that includes this unforgettable line: “Semen, sticky and hot, pooled on the carpet beneath her.”

Dickens it is not.

William Baer became furious when he learned that his daughter had been assigned the book. He said the school not only failed to notify parents, but they also failed to offer parents a chance to opt their kids out of reading the book.

“I was shocked when I read the passage, and not much shocks me anymore,” Baer told EAGNews.org. “My wife was stunned by the increasingly graphic nature of the sexual content of the scene and the imagery it evoked.”

Baer, who is an attorney, put it in perspective. He said if someone had been handing those passages to students off campus, they might have been arrested.

Ironically, it was Baer who got arrested – at a school board meeting to address the controversy.

Baer went beyond his allotted two minutes and then got into an argument with a parent who supported the book.

Baer was charged with disorderly conduct.

But he wasn’t the only parent to express outrage.

“I am utterly appalled that this book was in my son’s hands,” parent Sarah Carrigan told The Union-Leader newspaper.

The school board issued an apology “for the discomfort of those impacted and for the failure of the school district to send home prior notice of assignment of the novel.”

Superintendent Kent Hemingway told me in a telephone interview that the district had been using the novel since 2007 – and to his knowledge – there have not been any complaints.

He also said the principal contacted every family in the affected classes and polled them on whether or not they supported the racy novel.

“More than 80 percent consented with their students continuing with the book,” he said. “Ten percent said no.”

He said 10 percent were still undecided on whether or not they wanted their youngsters to read about lovers grinding their loins.

I asked the superintendent if he would agree that the novel was a bit smutty. He declined to comment.

“I’m not going to make a decision on pornographic material,” he said.

Heaven forbid the superintendent of schools be the arbiter of decency. So who, pray tell, is responsible for deciding whether children are exposed to pornographic literature?

“It’s a decision of the local community,” he told me.

I was especially intrigued by the school board’s official statement. Read carefully:

Did you catch the part about forcing parents to accept racy, bawdy novels rather than opt out?

This school district may very well be the poster child for why you should home school your children.

Author Jodi Picoult told the Union-Leader that she was aware of the controversy in Gilford. Her solution was to make the novel a family affair.

And afterwards, why not take the whole family down to the local strip club for dinner and a show?

Baer told EAGNews.org that he believes the incident is proof that public schools are trying to indoctrinate children with moral relativism.

“Many people in education and government truly believe our children are theirs,” he told the group. “These school incidents are a byproduct of this ‘we know best’ philosophy.”

So let’s review. An English teacher provided a sexually graphic novel to 14-year-old children. A parent complained. And when he complained too much, he was tossed in jail.

Sounds to me like the wrong person got arrested.