Dartmouth College Controversy: Is a Burrito Racially or Culturally Insensitive? 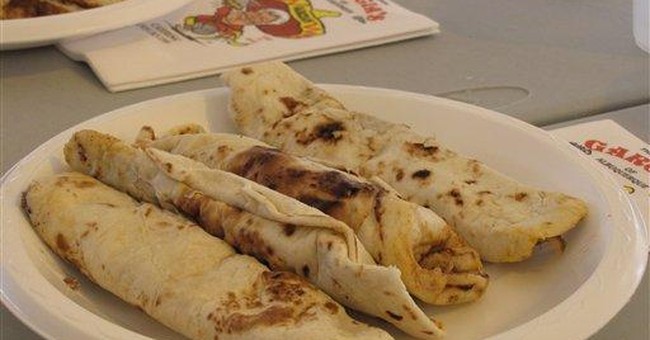 If U.S. News & World Report had a category for “Most Overly Sensitive Institution of Higher Learning,” Dartmouth College would win in a landslide.

The Ivy League school’s Greek community decided to cancel an upcoming fiesta-themed, charity fundraiser after a student complained that the event was culturally and racially offensive.

“As a Mexican-born, United States-raised, first-generation woman of color, it was sadly unsurprising that a culturally-themed party was seen as a casual venture for such a privileged institution such as Dartmouth,” wrote Daniela Hernandez, a student at the “privileged institution.”

Ms. Hernandez got hotter than a red chili pepper after the Alpha Phi sorority and the Phi Delta fraternity decided to host a “Phiesta” to raise money for cardiac care. Get it? “Phiesta.” Clever, right? Our good friends at the website Campus Reform alerted me to the story.

The Greeks were prepared to throw one heck of a party – complete with virgin Pina Coladas, strawberry daiquiris, chips and salsa, homemade guacamole and burritos.

I’m not sure if it was the guacamole or the burritos that sent Ms. Hernandez into a dither –but she fired off a letter to all sorts of Dartmouth bigwigs – including the person in charge of the “Office of Pluralism and Leadership” (that’s the office in charge of inclusion and diversity).

“There are various problematic structures and ideologies regarding a Cinco de Mayo-inspired event and I am sure that we, as a Dartmouth community, could learn from the extensive literature written about the Americanization of Cinco de Mayo and its construction as a drinking holiday in the United States, cultural appropriate and the inappropriate usage of cultural clothing, and the exploitation of groups of people and cultures for the sake of business opportunities,” she wrote in an email that appeared in the student newspaper.

It seems to me that if there’s any culture that should be upset about a holiday being turned into drunken debauchery it should the Irish.

And on a side note, kudos to the Dartmouth College English Department for teaching the youngsters to use really big words like, “Americanization.”

It wasn’t too long after Ms. Hernandez’s diatribe against the fiesta was published that the Greek community went into damage control mode.

Faster than you could say “pass the salsa,” the Greeks pulled the plug on their fiesta – apparently horrified that they had offended a single student – as in uno.

“We take these concerns very seriously,” student Courtney Wong told The Dartmouth. “And we want to make sure that we respect the diversity of the broader community.”

And then there’s this from Greek Taylor Cathcart: “We felt that the possibility of offending even one member of the Dartmouth community was not worth the potential benefits of having the fundraiser.”

Such hurt. Such anguish over beans and cheese wrapped in a flour tortilla.

Alysson Satterlund, the director of the Office of Pluralism and Leadership, explained the college’s position.

“Events that mock and marginalize others certainly do not reflect our Principle of Community and do not reflect values of inclusion, respect and a care for others,” she told the newspaper.

Sweet Lord, lady. They wanted to serve chips and salsa – not perform a Mexican hat dance.

And could somebody please explain to me how eating a burrito and sipping a Pina Colada is somehow racially offensive? Is Ms. Hernandez trying to say that non-Mexicans should not be allowed to feast upon South of the Border cuisine?

I happen to be a white guy and I do strive to be culturally sensitive. However, I’m also rather fond of the Taco Bell Chalupa. Does that make me a bad person? Should I swear off the Chalupa for the sake of tolerance and diversity? What about the Gordita? Then again, I’m not sure I want to be that culturally sensitive.

Do yourself a favor parents, save your pesos. Don’t let your kids attend this overly sensitive, muy loco liberal school.