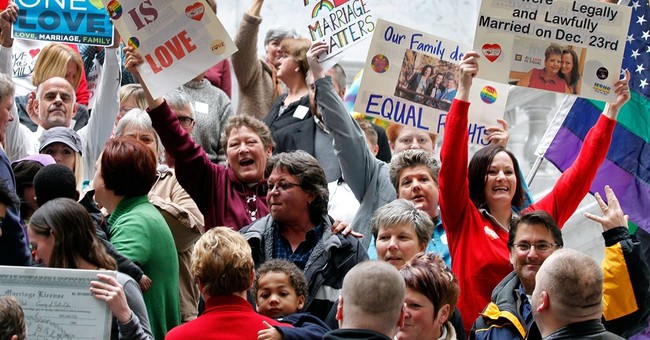 The owners of a Christian bakery who refused to make a wedding cake for a lesbian couple are facing hundreds of thousands of dollars in fines after they were found guilty of violating the couple’s civil rights.

The Oregon Bureau of Labor and Industries said they found “substantial evidence” that Sweet Cakes by Melissa discriminated against the lesbian couple and violated the Oregon Equality Act of 2007, a law that protects the rights of the LGBT community.

Last year, the bakery’s owners refused to make a wedding cake for Rachel Cryer and Laurel Bowman, of Portland, citing their Christian beliefs. The couple then filed a complaint with the state.

“The investigation concludes that the bakery is not a religious institution under the law and that the business’ policy of refusing to make same-sex wedding cakes represents unlawful discrimination based on sexual orientation,” said Charlie Burr, a spokesman for the Bureau of Labor and Industries.

The backlash against Aaron and Melissa Klein, owners of the bakery, was severe. Gay rights groups launched protests and pickets outside the family’s store. They threatened wedding vendors who did business with the bakery. And, Klein told me, the family’s children were the targets of death threats.

The family eventually had to close their retail shop and now operate the bakery out of their home. They posted a message vowing to stand firm in their faith. It read, in part:

“To all of you that have been praying for Aaron and I, I want to say thank you. I know that your prayers are being heard. I feel such a peace with all of this that is going on. Even though there are days that are hard and times of struggle we still feel that the Lord is in this. It is His fight and our situation is in His hands….Please continue to pray for our family. God is great, amazing and all powerful. I know He has a plan.”

Under state law, the complaint against the bakery now moves into a period of reconciliation. If they can’t reach an agreement, formal civil charges could be filed and the Kleins could face hundreds of thousands of dollars in fines.

Last August, Labor Commissioner Brad Avakian told The Oregonian, their desire is to rehabilitate businesses like the one owned by the Christian couple.

“Everybody is entitled to their own beliefs, but that doesn’t mean that folks have the right to discriminate,” he told the newspaper. “The goal is never to shut down a business. The goal is to rehabilitate.”

“There’s nothing wrong with what we believe,” he said. “It’s a biblical point of view. It’s my faith. It’s my religion.”

Klein said he’s not surprised by the ruling and called it “absolutely absurd.”

“I’ve never seen a government entity use a law to come after somebody because they have a religious view,” he said. “I truly believe Brad Avakian is trying to send a message. I don’t think the constitution of the state of Oregon means anything to these people.”

Tony Perkins, president of the Family Research Council, told me the plight of the Klein family is another example of the consequences of redefining marriage.

“We’re seeing a steady drumbeat of the loss of religious liberty, the ability to live your life, conduct your business according to the principles and teachings of your faith,” Perkins said.

He said he was especially disturbed by the level of attacks against the Klein family.

“It shows that tolerance is one way,” he said, referring to the militant gay protests. “Those who trumpet the message of tolerance have no tolerance for people who disagree with them.”

The Kleins warned that what happened to them could happen to other Christian business owners. And it already has.

In December a Colorado baker was ordered by a judge to either serve gay weddings or face fines. Jack Phillips, the owner of Masterpiece Cakeshop, was told to “cease and desist from discriminating” against gay couples. Phillips is a Christian.

New Mexico’s Surpeme Court ruled in August that two Christian photographers who declined to photograph a same-sex union violated the state’s Human Rights Act. One justice said photographers Elaine and Jonathan Huguenin were “compelled by law to compromise the very religious beliefs that inspire their lives.”

And the Washington attorney general filed a lawsuit against a florist who refused to provide flowers for a same-sex couple’s wedding. Barronelle Stutzman, the owner of Arlene’s Flowers & Gifts filed a countersuit, telling the Christian Broadcasting Network she “had to take a stand” in defense of her faith in Christ.

Perkins told me that in many cases gay couples are targeting businesses owned by Christians.

And if you have any doubts about the validity of his claims, just ask the Klein family. They know what it’s like to incur the wrath of militant homosexual bullies. And they learned that in today’s America – gay rights trump religious rights.