The Time to Overturn Roe v. Wade Is Now

Todd Rokita
|
Posted: Jan 21, 2022 12:01 AM
Share   Tweet
The opinions expressed by columnists are their own and do not necessarily represent the views of Townhall.com. 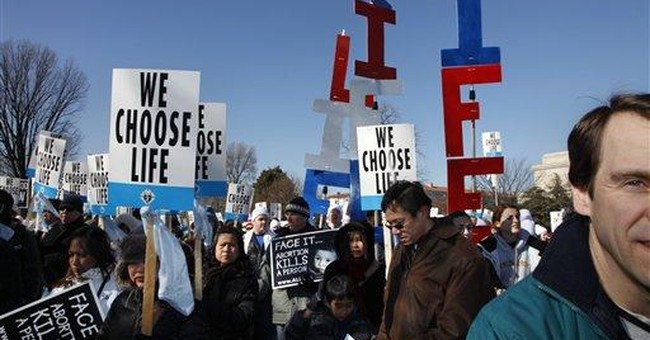 On Jan. 22, 1973, the U.S. Supreme Court legalized abortion nationwide with its ruling in Roe v. Wade.

As we look back 49 years later, we mourn the more than 62 million babies in America whose lives since then have been extinguished while they were yet in their mothers’ wombs.

Even as we grieve, however, we pro-lifers can also hope. The Supreme Court could be on the verge of overturning that infamous decision that even many abortion proponents concede to be a poor example of jurisprudence.

Speaking last year to a group of fellow pro-lifers, I encouraged the crowd to keep persevering in the fight — and to take courage from the realization that our cause is noble and just. We endeavor to save the lives of innocent children and protect the health of women.

As Indiana’s attorney general, I have witnessed the need for perseverance firsthand while defending the constitutionality of our own state’s commonsense abortion laws in federal court.

Hoosiers are well served by our deputy attorneys general, many of whom have been fighting this and other battles for years. They do world-class work and are well-respected throughout the judiciary. And all of them serve the people of our great state with servants’ hearts.

This past summer, a federal district court prohibited the state from enforcing several longstanding Indiana abortion laws, including requirements that only physicians may administer abortion drugs and that only hospitals or ambulatory surgical centers may host second-trimester abortions — which are major surgical procedures. My office appealed, and immediately the court of appeals put those extreme orders on hold based on decades of precedent supporting Indiana’s position.

The full appeal remains pending, but the case — Whole Woman’s Health Alliance v. Rokita — is noteworthy because it has already consumed more than three years of litigation (and two trials) over basic, longstanding abortion regulations.

In ruling against our laws, the district court took advantage of the Supreme Court’s more recent muddled abortion decisions to pick and choose which regulations would stand and which would fall.

Still, one would expect so-called “pro-choice” advocates to view the entire purpose of legalized abortion as a means to ensure women have access to safe procedures performed by real doctors in sanitary locations equipped to deal with any complications. Apparently not: In dissent, one judge went so far as to chide Indiana for “insisting that its laws have only the high-minded purpose of protecting women’s health.”

Long gone are the days when promoters of “choice” touted the motto of “safe, legal, and rare.” Pro-abortion extremists now lobby for abortion on demand at any cost to women’s health and safety.

Obviously, the abortion industry itself also pushes for the wholesale acceptance of the procedure — acting, perhaps, on the basis of a profit motive.

Abortion is no longer promoted simply as a means of protecting vulnerable women but as a beneficial end in itself.

For the pro-choice movement today, abortion is a positive good, an achievement to be shouted regardless of the physical, emotional and spiritual consequences to women who have them.

Mother Teresa once said that “abortion is profoundly anti-women. Three quarters of its victims are women: half the babies and all the mothers.”

In our three-year-old case, the testimony of several brave women about their own abortions confirms that statement. It is one thing to promote an abstract idea that abortion somehow helps women and quite another to hear a woman’s voice break as she describes having to flush her own dead child down the toilet or watch it swirl down the drain.

The district court injunction in our case likely represents the high-water mark for pro-abortion zealots — as the appeals-court order staying that decision indicates.

Now the Supreme Court has a golden opportunity to overrule (or at least narrow) Roe v. Wade in Dobbs v. Jackson Women’s Health Organization, a case challenging Mississippi’s ban on abortion after 15 weeks.

Meanwhile, a pro-abortion protester in Texas recently held a poster of a uterus with fallopian tubes drawn to resemble a snake bearing the Gadsden Flag motto, “Don’t tread on me.” For me, that poster calls to mind not a debate over sexual liberty but the famous image of the Blessed Mother crushing the head of the serpent at her feet.

The pro-life movement is about the triumph of women over the lie that abortion is a positive good that advances equality. I am proud to say that my office plays a part in that battle.

And as we cling to the hope that Roe v. Wade will be a relic of the past by its 50th anniversary, we shall continue to persevere in our work.

Todd Rokita is the 44th attorney general of Indiana.