Scott Pruitt Will Be A Good Steward of God’s Creation

Timothy Head
|
Posted: Feb 16, 2017 10:40 AM
Share   Tweet
The opinions expressed by columnists are their own and do not necessarily represent the views of Townhall.com. 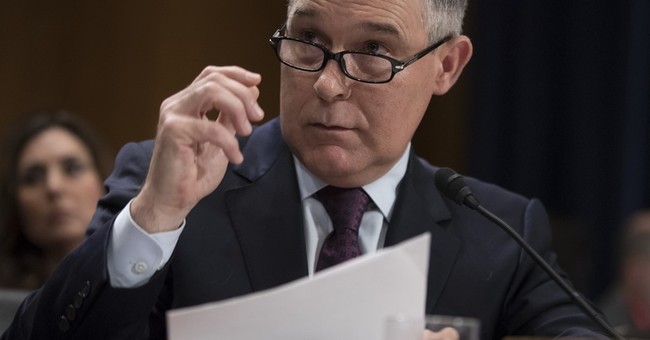 The Bible teaches us, in the very beginning in Genesis Chapter Two, that God’s people are to serve him by being good stewards of the earth saying, “the Lord God took the man and put him in the Garden of Eden to work it and take care of it.”

Attorney General Scott Pruitt of Oklahoma, President Donald Trump’s nominee to be the Administrator of the Environmental Protection Agency, is a man of deep and abiding faith who understands the Christian ethos of protecting God’s creation and loving your neighbor.

The well-funded and well-organized environmentalists and their allies in Congress are distorting his record defending natural resources as Oklahoma Attorney General and threatening his confirmation. The left wing extremists at the Sierra Club, went as far as calling Pruitt unfit to serve and said confirming him as EPA Administrator would be "putting an arsonist in charge of fighting fires."

The truth is that Pruitt has a distinguished record of conserving natural resources and understands the importance of clean air and clean water for all Americans. He helped preserve many of Oklahoma’s scenic lakes and rivers through a water rights settlement with local Indian tribes and worked across state and party lines with his Democratic counterpart in Arkansas to reduce pollution in the Illinois River. The people of Oklahoma were protected by Pruitt when he took on the public utilities oil and gas companies who contaminated his state’s air and water supply.

At the same time, he also understands that taking care of God’s creation and conserving our natural resources shouldn’t force us to violate the commandment to love thy neighbor. He believes in a balanced approach to regulation that conserves our natural resources and protects the environment while also fostering economic growth and protecting state and local rights. Jesus said, “or what does it profit a man to gain the whole world, and forfeit his soul?” and so what kind of stewardship of the Earth’s resources should cost our neighbor their job and force them into the unemployment line, costing them income and health insurance to support their families?

The EPA has an important role in protecting Gods creation, but as the Mercatus Center at George Mason University found, burdensome federal regulations that have ruled the day for decades, cost the U.S. economy over $4 trillion since 1980 or 13,000 for each American worker.

Radical environmentalists are more than willing to sacrifice American jobs and family income at the altar of political correctness and the religion of their climate change agenda, and as the election of President Trump showed in November, Americans overwhelmingly object to their agenda.

As Administrator at EPA, Scott Pruitt will usher in an era of responsible stewardship. He cares deeply about the environment and the health and safety of every American and has a substantial record of doing just that in Oklahoma as the state’s Attorney General.

Smart, data driven environmental rules and regulations that the EPA and its new Administrator can enact and enforce, to fulfill its obligations to protect the natural resources of our nation, can live in harmony with an environment of job creation and economic expansion. Over the past eight years, the EPA overreached with aggressive measures pushed by the enviro-lobby and achieved little to protect the environment while devastating local economies. Clean air and water and a pro-growth agenda are not incompatible.

The U.S. Senate should move swiftly this week to confirm Scott Pruitt as Administrator of the Environmental Protection Agency and put in charge an effective leader who will usher in an era of responsible natural resource stewardship while also taking into account the human costs and benefits of environmental regulation.