Timothy Head
|
Posted: Mar 14, 2016 12:46 PM
Share   Tweet
The opinions expressed by columnists are their own and do not necessarily represent the views of Townhall.com. 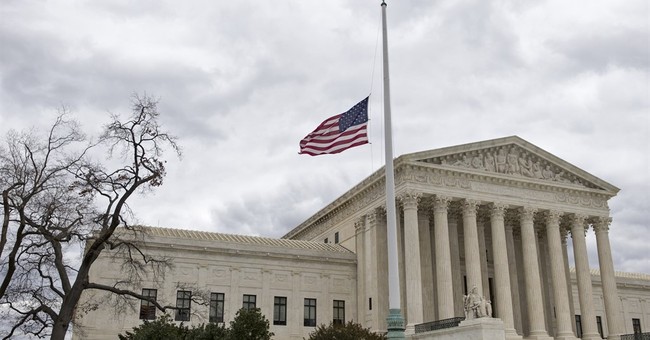 The untimely passing of U.S. Supreme Court Justice Antonin Scalia, an ardent defender of our founding documents and a pillar of American jurisprudence, has left our nation with a massive void in defense of the Constitution. This void threatens many of the bedrock values and principles that have shaped America.

Elected officials, judges, journalists and everyday Americans of all political persuasions recognized the contributions of Justice Scalia upon his death, while opining on the political, judicial and societal impact of replacing him began in earnest, often at the same time. President Obama announced on Twitter shortly after Scalia’s death that the justice would “be remembered as one of the "most consequential judges and thinkers to serve on the Supreme Court” and just two minutes later stated, "I plan to fulfill my constitutional responsibilities to nominate a successor in due time. The battle with ?@SenateMajdr is joined.”

The wheels of power in Washington, DC move at a very plodding pace, and in this case and throughout our nation’s history, appointments to the U.S. Supreme Court are not, and should not, be any different. Accordingly, Senate Majority Leader Mitch McConnell and Senate Judiciary Committee Chairman Chuck Grassley have both publicly vowed to block any nominees from the White House until the American people have elected a new president in November.

Article II, Section 2 of the U.S. Constitution provides the U.S. Senate with the power to confirm or reject Presidential appointments to the Court. Our founders included the clause as a safeguard against authoritarianism by providing a clear separation of powers. Leader McConnell and Chairman Grassley are performing their duties to the full extent authorized by the Constitution and conservatives should commend and support their leadership.

The filling of this vacancy could shift the ideological balance of the Supreme Court for an entire generation. A shift that social conservatives and people of faith who cherish our founding principles and freedoms should not underestimate. Some of the most important social and political issues of our time are both at stake and so conceding to the wishes of the President to stack the court with his third left-leaning ideological judge, after liberal Justices Elena Kagan and Sonia Sotomayor, would tip the scales against values held by people of faith.

President Obama has fundamentally transformed the court with his appointments, shifting legal decisions to favor his progressive, anti-traditional values agenda in some of the most substantial decisions in decades, including Obergefell v. Hodges, which held that same sex marriage is a Constitutional right and that states must either license same-sex marriages or recognize those marriages from other states.

Two other decisions, which protected some of our most sacred Constitutional rights, and were decided on votes swung by Justice Scalia, could also be threatened with another liberal appointment to the Court, including: District of Columbia v. Heller and Burwell v. Hobby Lobby.

The Heller decision provided an important Second Amendment victory by establishing a right to own a gun for personal use and for self-defense, and Burwell was an important religious liberty decision which exempts some businesses from being forced to provide contraception services in their employee health insurance plans.

Thanks to Mr. McConnell and Mr. Grassley, and the social conservatives standing behind them, he will not have the opportunity to continue to fundamentally change America through the courts.