Timothy Daughtry
|
Posted: May 05, 2020 12:01 AM
Share   Tweet
The opinions expressed by columnists are their own and do not necessarily represent the views of Townhall.com. 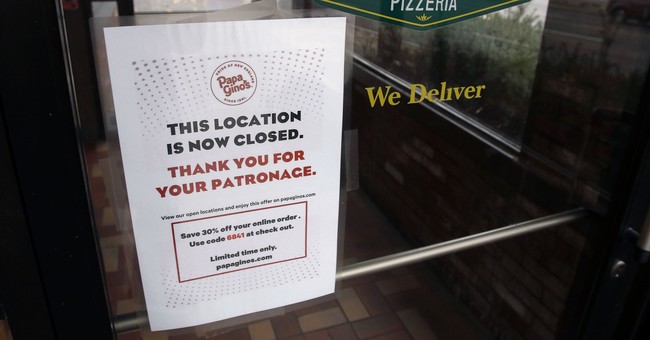 If you like how the far left has co-opted higher education, news broadcasts, and entertainment to push their political agenda, you’re going to love what the left is doing in American business.  As left-wing activist groups pressure more and more corporations to adopt their “environmental, social, and governance” (ESG) policies, they have forced the question:  What is the purpose of business?

The question of the purpose of business is highlighted in three recent letters, one from Larry Fink, CEO of investment management giant BlackRock, Inc., and two from business and political leaders who challenged his views.  On the surface, the controversy appears to pit two models of business purpose – the shareholder model and the stakeholder model – against each other.  But closer inspection reveals there are far deeper questions with serious implications for free enterprise.

In the classic shareholder model of business purpose as stated by Milton Friedman, the purpose of a business is to make a profit for its shareholders.  The stakeholder model of business purpose, on the other hand, has gained considerable support from reputable executives and other business experts.  In August, 2019 the Business Roundtable released a statement redefining the proper purpose of the corporation as serving not only the interests of shareholders, but also the interests of other stakeholders such as customers, employees, suppliers, and the larger community.

BlackRock’s Larry Fink., an advocate of stakeholder thinking, brought the question of business purpose to a head with a recent letter to CEOs.  Part of Fink’s letter is boilerplate stakeholder capitalism, such as the statement that, “…a company cannot achieve long-term profits without embracing purpose and considering the needs of a broad range of stakeholders.”  When he writes, “Ultimately, purpose is the engine of long-term profitability,” he echoes the first of Edwards Deming’s Fourteen Points.

Few executives familiar with Deming’s ideas on business purpose and long-term profitability would take issue with those statements.  In his famous quip that buggy whip companies did not understand their true purpose in the market, Deming made the point that businesses need to innovate their products and services to meet the changing needs of the marketplace.  If you think your purpose is making buggy whips, the internal combustion engine puts you out of business.  If you understand your purpose in the market as “vehicular acceleration,” you adapt by making parts for the new engines.

Following Deming, it was common for business consultants to challenge businesses with the question, “What business are you really in?”   The point was to see past current products and to think broadly about what need the business met in the marketplace.   The implications for purpose were very different if a company such as Kodak saw its purpose as “making photographic film” or “imaging,” as the latter would leave room to adapt to emerging digital technology.

Furthermore, the central idea of the stakeholder model – that shareholder profitability depends on meeting the needs of other stakeholders such as customers, employees, and suppliers – would not be controversial to most business leaders.  For years, businesses have used a strategic planning process popularized by Robert Kaplan and David Norton in their book Strategy Maps.  The “destination” of the strategy map is profitability.  But then the map lays out the goals the business has to achieve for customers in terms of price, service, inventory, reputation, and other aspects of the company’s value proposition.  Achievement of those customer goals, in turn, depends on excelling at various internal processes including attracting, developing, and retaining the right employees; having good relationships with suppliers; and having a good reputation in the market.

When we think of business purpose as making a profit by meeting needs in the market and when we understand shareholders as customers, employees, suppliers, and others directly concerned with a particular business, the shareholder model and stakeholder model are just two sides of the same coin.

But what if the ideas of business purpose and multiple stakeholders are expanded to include a political agenda?  When Fink’s letter to CEOs stated that “Climate change has become a defining factor in companies’ long-term prospects” and when he describes climate change as an investment risk, controversy flared.   Concern for the environment is a widespread, nonpolitical value, but “climate change” is decidedly political and is at the spearpoint of the left’s “environmental, social, and governance” agenda for business.

And it was the introduction of political issues into the discussion of business purpose that triggered the two letters to Fink.   The first letter was signed by political and business leaders and raised concerns about the intrusion of the left’s ESG agenda into corporate policy decisions.  According to the letter, “Most ESG shareholder proposals are sponsored by activist groups that abuse the proxy process to achieve social and cultural changes that are entirely unmoored from the interests of corporate shareholders.”   The letter goes on to describe the influence of environmentalist groups, left-leaning pension funds, and other left-wing causes that are “unconcerned with corporate performance” and whose goals are grounded more in politics than in business.

A second letter to Fink was signed by current and former CEOs.  Again, the concern in this letter is not with the idea of multiple stakeholders itself.  These CEOs argue that the distinction between the shareholder and stakeholder models is “purely cosmetic” and that any business making a profit for shareholders must be friendly to other stakeholders such as customers, employees, and suppliers.  The concern is that the nebulous idea of stakeholders opens the door for political activists to impose their agenda on business decisions.

Market-driven companies serve a social purpose by anticipating and meeting needs in the marketplace at competitive prices and by making a profit for their investors.  Furthermore, market-driven companies have incentives not only to do those good things, but to do them in good ways.  Business experts have long known that companies with strong values have a competitive advantage.  Companies that promote values such as responsible environmental stewardship, treating customers and vendors with integrity, and fairness and opportunity for employees tend to attract good customers, good employees, and good vendors.   Customers, employees, investors, and other stakeholders reap the benefits of such market-driven companies regardless of their political beliefs.

Market-driven businesses guided by values such as integrity and honesty are not ethically neutral, but they can and should be politically neutral.  When a company adopts political agendas such as climate change, opposition to gun ownership, gender-driven criteria for board composition, or attacking “toxic masculinity” in a razor blade ad, its focus on the broader market can become blurred as it seeks to satisfy the smaller group of people who push those positions.  Those are the kinds of positions now being pushed upon American businesses by left-wing activists who see every cultural institution as a vehicle for their political agenda.

When leftist groups push “ESG” resolutions on corporations, it’s a safe bet that they have an agenda other than making a profit by producing goods and services that the market needs.

And that’s bad business for America.

Dr. Tim Daughtry is a business consultant and co-author of Executing Strategy: From Boardroom to Front Line and also Waking the Sleeping Giant: How Mainstream Americans Can Beat Liberals at Their Own Game.  Follow him on Twitter @TCDwriter.