Making Sense of the Circus Outside the GOP Convention

Timothy Daughtry
|
Posted: Jul 20, 2016 8:23 AM
Share   Tweet
The opinions expressed by columnists are their own and do not necessarily represent the views of Townhall.com. 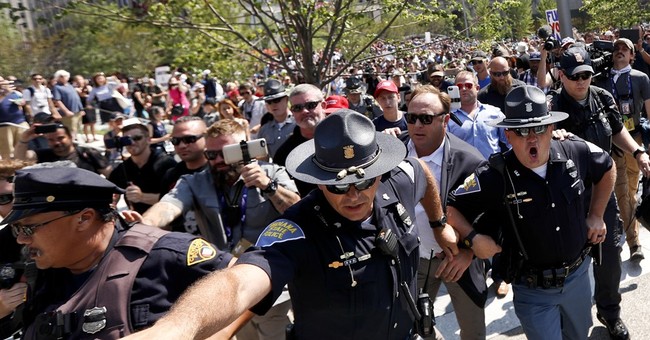 In one of the funnier scenes from Mel Brooks’ classic western comedy Blazing Saddles, villain Hedley Lamarr, brilliantly played by Harvey Korman, is developing his plan to attack the town of Rock Ridge.  In a crescendo of evil glee, Lamarr instructs his aide to round up an army of fellow villains, including “mugs, pugs, thugs, nitwits, halfwits, dimwits” and a hilarious litany of others.

Whoever rounded up the motley assortment of angry leftists outside the GOP convention in Cleveland must have taken a lesson out of Hedley Lamarr’s playbook.  The difference, of course, is that the characters in Blazing Saddles are funny and the story ends with an uplifting message.

One wonders if left wing demonstrators ever think about the messages on their signs, or if they ever look around them to evaluate the company they’re in.  For example, do any of them ever see a potential inconsistency between their constant accusations of  “hatred” and their hateful descriptions of Republicans as “fascists?”

Wanting to revitalize the economy, restore rule of law, and keep our families safe is “fascist?”

And then we see signs attacking the police carried by protesters who are protected by the police.  (So far, we have not seen any “Blue Lives Matter” signs among the protesters.)

The protesters claim to support equality under the law, but so far we have not seen a single liberal with a sign demanding that Hillary Clinton be prosecuted just like any other citizen would have been for the same crimes.  The police officers who put their lives on the line to protect us have to make thousands of decisions every year, under tremendous pressure, that have serious consequences for themselves and others.  The vast majority of the time, they make the right decisions.  The DOJ only had one big decision this year about equality under the law, and they blew it.

But the real head-scratcher is seeing signs demanding an end to “Islamophobia” alongside signs demanding an end to “homophobia.”  If ever two agendas would seem to be naturally at odds, it would be those of the LGBT movement and that of strict Islamic teaching.  It might be interesting to ask these protesters – or Hillary Clinton for that matter – if they consider Islamic teaching to be “homophobic,” or if the LGBT movement’s opposition to Islamic teaching on homosexuality is “Islamophobic.”

How can we “celebrate diversity” as the left demands when we have groups making contradictory demands of society?

Much as the cacophony of signs and demands may seem self-contradictory, there is an underlying consistency when viewed through the lens of Cultural Marxism.  Leftist academics realized decades ago that the West’s Judeo-Christian culture was a major barrier to the Marxist agenda.  Their strategy called for a gradual “long march through the cultural institutions” of education, news, and entertainment.  By subjecting our cultural foundations to relentless criticism, the Judeo-Christian pillars of our society would eventually fall and bring our whole system down with them.

And, as Saul Alinsky advised, the radical left could use our “book of rules” as a tool to defeat us.  For the Cultural Marxists, freedom of speech was a door that would only swing one way.  Leftist professors would be protected by the First Amendment and principles of academic freedom when they were radical outsiders, and then when they became insiders they would use tactics such as speech codes and trigger warnings to intimidate and silence anyone who disagreed with them.

One of the left’s maxims was, “There are no enemies on the left.”  Anyone working to destroy the foundations of America was on the team, regardless of the particulars of their agenda.  Or, as the old Middle Eastern saying goes, “The enemy of my enemy is my friend.”

And we see that maxim in practice in the protests outside the GOP convention.

The seeming inconsistencies of the left’s rhetoric and protest signs are easily resolved if one pictures our Republic as represented in a magnificent stained glass window.  The history and heroes, lessons learned and foundational values are all there to remind us of who we are and what we hold dear.  For the left, words are used, not as a means of communication and discussion, but as bricks to throw through that window.  It’s not the meaning of the words that counts, but the effect.

To defeat the radical left, we have to understand them.  And that means learning how to read the signs.