Triggered by Dr. Seuss and 'The Muppet Show'

Tim Graham
|
Posted: Mar 05, 2021 12:01 AM
Share   Tweet
The opinions expressed by columnists are their own and do not necessarily represent the views of Townhall.com. 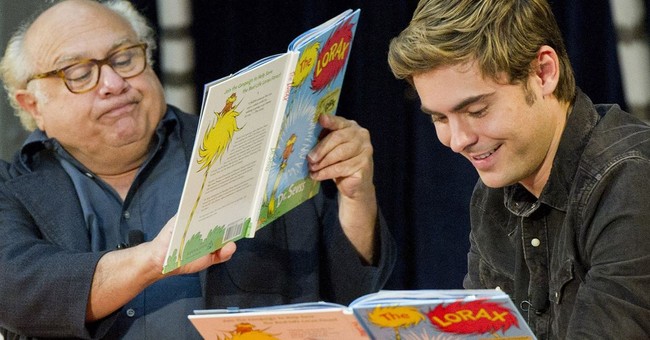 The hottest theme in liberal punditry is mocking conservatives for their objections to Woke Culture's long march through American entertainment conglomerates. It's not "real news."

NBC late-night "comedian" Seth Meyers denounced the Conservative Political Action Conference in Orlando, claiming, "(T)he only truly unifying thing at CPAC, the beating heart of modern conservatism, were the dumb, invented culture-war grievances, as evidenced by their complaints about total nonsense, like the Muppets and Mr. Potato Head."

Second, everyone understands why beloved toys and puppet shows are talked about. They're well-known by nearly everyone, unlike, say, all the goodies the liberals hid in the $1.9 trillion "COVID relief" package.

These were called "cancel culture" controversies, but that's not exactly precise. Hasbro mysteriously suggested it would remove the "Mr." from Mr. Potato Head but then backtracked. The Disney+ streaming service has added content warnings to 18 episodes of "The Muppet Show." That's not canceling Kermit the Frog.

Then, the publisher of classic Dr. Seuss books announced it would no longer sell six old titles it decided have racially insensitive imagery. Once again, this isn't "outlawing Dr. Seuss" or banning "The Cat in the Hat." But it can be defined as very negative branding of Dr. Seuss and the Muppets. Dr. Seuss and Muppet creator Jim Henson weren't racist, but these controversies might imply they were.

Fifty years ago, I adored Dr. Seuss books -- the drawings and the poetry. Our family watched "The Muppet Show" every Saturday night when it originally aired. These defined the words "family entertainment." Conservatives are mocking the left for attempting to turn wholesome products into loathsome products.

This debate needs more precision, not less. What pages in the Dr. Seuss books are objectionable? TV stories on this won't show any images. Some images of African savages clearly seem like antiquated stereotypes, but others are more debatable. You can't debate them if no one will show them.

Disney claimed, "Rather than removing this content, we see an opportunity to spark conversation and open dialogue on history that affects us all." Open dialogue? Disney has failed to offer any explanation of what exactly earned a content warning in "The Muppet Show."

The Guardian reports that in the third season, an episode with British comedian Spike Milligan closes with a performance of the song "It's a Small World After All," and Milligan appears for about eight seconds as "as a Chinese person with exaggerated front teeth and a long braid." That's surely a stereotype. But he gets repeatedly shooed off the stage by Sam the Eagle.

In one flagged episode from 1980, Johnny Cash performed with several Muppets in front of a Confederate flag. Cash didn't sing the word "Dixie" or speak warmly of slavery. He sang "Dirty Old Egg-Sucking Dog," with the gag aimed at Rowlf the Muppet dog.

Meanwhile, left-wing media outlets such as National Public Radio offered the No. 1 spot in its "100 Best Songs of 2020" honors to Cardi B's smutty rap song "WAP" (for "Wet A-- P----"), and there are no content warnings for that on YouTube, not even the explicit version with the N-word.

That is not wholesome family entertainment. Naturally, Cardi B doesn't let her daughter listen to her music. It just pays the bills. But everyone else's children can access the video on an iPad with no more limitation than five seconds of advertising.

So save us the trigger warnings about people being harmed by Dr. Seuss books or "The Muppet Show."