The Road to Ruin in Riots

Tim Graham
|
Posted: Jan 08, 2021 12:01 AM
Share   Tweet
The opinions expressed by columnists are their own and do not necessarily represent the views of Townhall.com. 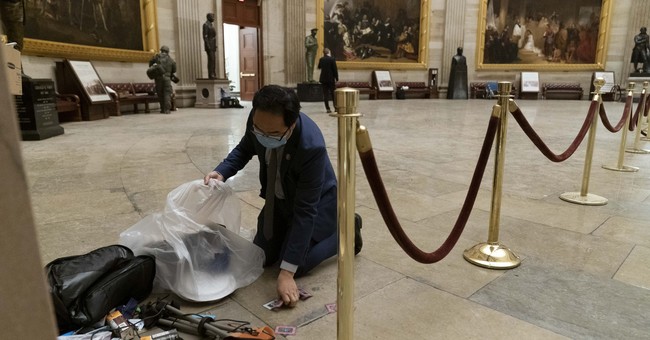 Critics of liberal-media bias are often accused of whataboutism. We're accused of diverting everyone's attention from some conservative or Republican scandal or offense by changing the subject to the media's performance.

After a pro-Trump crowd breached the Capitol, forcing lawmakers to flee, my friend and former colleague Dan Isett tweeted: "Yeah, the media covered for left-wing riots last year. So what? We aren't children and we don't use misbehavior by those we disagree with to excuse the misbehaviors of those we do. Personal responsibility is a hallmark of our philosophy."

Amen. If we were raised right, our parents told us two wrongs don't make a right. This is not a time for calling out double standards. This is a time for standards. Respecting the home of our Congress is the lowest possible standard for American civilization. You don't Make America Great Again by shoving cops and breaking glass on Capitol Hill.

It's not hard to find prominent voices on the left who are suddenly finding lawlessness inexcusable after having suggested it was excusable if it forwarded their agenda. They used words like "rebellion" to glamorize unrest. But this is not rioting at an Apple store. This is where our democracy lives.

NBC News' Chuck Todd suggested that the attack on Congress could have the strange effect of bonding the politicians together. After all, they were all at risk in this melee. That's not much of a silver lining. But if we believe in democracy, we should believe that all the people who have been elected have a right to feel safe in their workplace, just as we all do.

For four years now, we have scolded liberals who claimed repeatedly that President Donald Trump is an authoritarian who would make democracy die in darkness. But the riot of Trump supporters at this late date, deluded with the bizarre notion that Trump won in a landslide, suddenly falsifies our critique. Democracy was under siege from people wearing Trump hats and waving American (and Confederate) flags.

The "told you so's" from liberals weren't half as depressing as the "protests" from so-called "born-again Americans" themselves. And at this sad hour, I'm not invested in driving the notion that a vast left-wing conspiracy somehow overtook a peaceful Trump rally. In this moment, it feels like another unproven claim, like the Trump landslide.

Adding salt to the wounds of video showing "conservatives" ramming through police barricades were pictures of "conservatives" destroying media equipment. If you're stomping on someone's camera, you're no friend of America. Just because journalists might seem to wear hats that say America has never been great doesn't excuse your destruction of property. They have a right to report -- even a right to distort -- and we have the right to call out distortions. That's the First Amendment, too.

The media deserve our everyday attention. But this riot wasn't an everyday phenomenon. No arrogant scold with a microphone and an expensive peacoat compares to thugs who make the U.S. Capitol Police draw their guns. Right now, we should call this what it is: a day that should live in infamy.