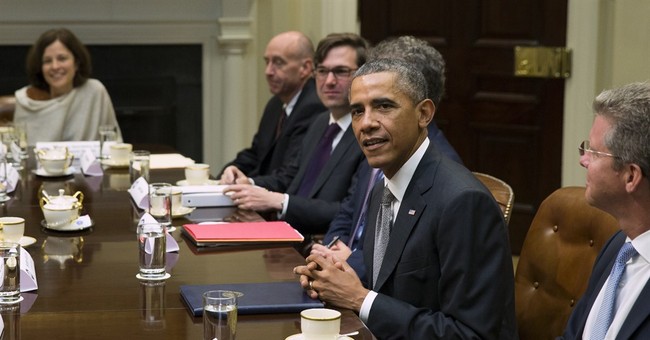 The Ebola outbreak in West Africa is both a danger in itself and a wake-up call for Americans -- about President Obama, about the institutions of this country and, most important, about ourselves.

There was a time when an outbreak of a deadly disease overseas would bring virtually unanimous agreement that our top priority should be to keep it overseas. Yet Barack Obama has refused to bar entry to the United States by people from countries where the Ebola epidemic rages, as Britain has done.

The reason? Refusing to let people with Ebola enter the United States would conflict with the goal of fighting the disease. In other words, the safety of the American people takes second place to the goal of helping people overseas.

As if to emphasize his priorities, President Obama has ordered thousands of American troops to go into Ebola-stricken Liberia, disregarding the dangers to those troops and to other Americans when the troops return.

What does this say about Obama?

At a minimum, it suggests that he takes his conception of himself as a citizen of the world more seriously than he takes his role as President of the United States. At worst, he may consider Americans' interests expendable in the grand scheme of things internationally. If so, this would explain a lot of his foreign policy disasters around the world, which seem inexplicable otherwise.

Those critics who have been citing Barack Obama's foreign policy fiascoes and disasters as evidence that he is incompetent may be overlooking the possibility that he has different priorities than the protection of the American people and America's interests as a nation.

This is a monstrous possibility. But no one familiar with the history of the twentieth century should consider monstrous possibilities as things to dismiss automatically. Nor should anyone who has followed Barack Obama's behavior over his lifetime, and the values that behavior reveals.

A few critics who, early on, sensed something un-American, if not anti-American, in Barack Obama, succumbed to the idea that he was not a native-born citizen. That claim blew up in their faces.

Nor was birthplace crucial anyway. People born overseas have put their lives on the line to defend America, and scientists who escaped from Europe in the 1930s played a major role in creating the nuclear bomb that made the United States a superpower. Conversely, the country's most notorious traitor -- Benedict Arnold -- was born on American soil.

Whatever the reason, or combination of reasons, that led to President Obama's foreign policy disasters around the world -- with the crowning disaster of all, a nuclear Iran, looming on the horizon -- it cannot be a simple lack of knowledge or experience. Various former members of the Obama administration are telling the same story, of information and advice from knowledgeable and experienced officials being ignored by this vain and headstrong man.

Back in the 18th century, Edmund Burke pointed out that, whatever the institutions of government, most of the outcomes of what it does "must depend upon the exercise of the powers which are left at large to the prudence and uprightness of ministers of state."

What did the American voters know about the prudence and uprightness of this untried man they elected president, as a result of his glib rhetoric and his racial symbolism? It is not just bad luck when a reckless gamble turns out disastrously.

No one knows at this point how big the Ebola danger may turn out to be. But what we do know is that official reassurances about this and other dangers have become worthless.

The erosion of Constitutional government over the years has become, under the Obama administration, a deluge of arbitrary edicts and defiant lawlessness protected by a grossly politicized Department of Justice.

It may be time to consider reorganizing the institutions of government, so that high officials who try to reassure the public about medical crises are not officials who serve "at the pleasure of the president." Nor should the Attorney General, whose duty is to enforce the laws, be part of an administration whose law-breakers the Justice Department can protect from prosecution.