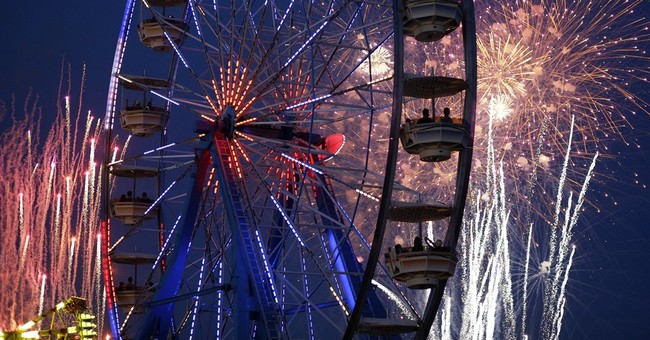 All is not lost. But all could be lost -- especially if too many of us take freedom for granted and focus our attention on other things, like electronic gadgets and the antics of celebrities, while ignoring such dangers as nuclear weapons in the hands of suicidal fanatics, with a track record of savagery, whom we are too squeamish to call anything stronger than "militants."

Nor are all the dangers abroad. Birthdays are supposed to be times for celebration and gift-giving. But America's upcoming birthday on the Fourth of July is a time when the gift most needed is an urgent warning about the dangers of losing the things that have made this country America -- and have long made "America" a ringing word of freedom, not only in this country but to people around the world.

When a former Speaker of the House of Representatives announces that she is going down to our border to greet and welcome masses of people crossing that border illegally, you know that something is fundamentally wrong.

All that matters to people like Nancy Pelosi is the symbolism of welcoming the oppressed, especially if they represent more votes for Democrats, who will shower the taxpayers' money on them.

As if to make clear the elite's contempt for ordinary Americans' intelligence, President Obama tells us that the people crossing the border "love" America. How could he possibly know that, any more than he could know how to "invest" the taxpayers' money in "the industries of the future," which have in fact gone bankrupt?

What is involved are not just bad policy choices. What is involved are policies imposed unilaterally by the president, in defiance of Congress' authority to legislate and in contempt of the Constitution's separation of powers -- on which all our freedoms ultimately depend.

The people who wrote the Constitution of the United States understood what dangers there are to the freedom of the people -- and that freedom can be quietly eroded by degrees, rather than taken all at once.

Too many people today seem oblivious to such dangers. So what if the government used the muscle of the Internal Revenue Service to keep groups opposed to the Obama administration tied up in red tape or litigation in an election year? Enough games like that can make our elections meaningless.

This arrogant abuse of power does not end with the federal government. In Massachusetts, teenager Justina Pelletier was taken from her parents' custody and held virtually incommunicado for over a year, because her parents preferred to continue to have her treated as the physicians at a medical facility associated with Tufts University had treated her, even though shrinks at Children's Hospital in Boston said her problems were in her head, and took her off some of her medications.

This difference of opinion as to the best medical treatment for Justina Pelletier was enough to get a judge to side with headstrong bureaucrats and override her parents' rights. So a girl who was ice skating before ended up in a wheelchair under the "care" of shrinks.

Fortunately, enough media attention, especially by former governor Mike Huckabee on Fox News Channel, finally got this child freed. Perhaps we can hope that all is not lost -- yet. But if this case is a symbol of Americans fighting back, it is also a symbol of why it is desperately important to fight back.

That spirit is the best birthday present for America.