Suicide of the West? 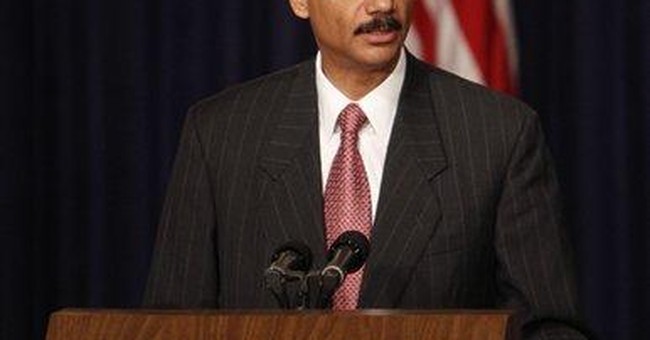 Britain's release of Abdel Baset al-Megrahi-- the Libyan terrorist whose bomb blew up a plane over Lockerbie, Scotland in 1988, killing 270 people-- is galling enough in itself. But it is even more profoundly troubling as a sign of a larger mood that has been growing in the Western democracies in our time.

In ways large and small, domestically and internationally, the West is surrendering on the installment plan to Islamic extremists.

The late Aleksandr Solzhenitsyn put his finger on the problem when he said: "The timid civilized world has found nothing with which to oppose the onslaught of a sudden revival of barefaced barbarity, other than concessions and smiles."

He wrote this long before Barack Obama became President of the United States. But this administration epitomizes the "concessions and smiles" approach to countries that are our implacable enemies.

Western Europe has gone down that path before us but we now seem to be trying to catch up.

Still, the release of a mass-murdering terrorist, who went home to a hero's welcome in Libya, shows that President Obama is not the only one who wants to move away from the idea of a "war on terror"-- as if that will stop the terrorists' war on us.

The ostensible reason for releasing al-Megrahi was compassion for a man terminally ill. It is ironic that this was said in Scotland, for exactly 250 years ago another Scotsman-- Adam Smith-- said, "Mercy to the guilty is cruelty to the innocent."

That lesson seems to have been forgotten in America as well, where so many people seem to have been far more concerned about whether we have been nice enough to the mass-murdering terrorists in our custody than those critics have ever been about the innocent people beheaded or blown up by the terrorists themselves.

Tragically, those with this strange inversion of values include the Attorney General of the United States, Eric Holder. Although President Obama has said that he does not want to revisit the past, this is only the latest example of how his administration's actions are the direct opposite of his lofty words.

It is not just a question of looking backward. The decision to second-guess CIA agents who extracted information to save American lives is even worse when you look forward.

Years from now, long after Barack Obama is gone, CIA agents dealing with hardened terrorists will have to worry about whether what they do to get information out of them to save American lives will make these agents themselves liable to prosecution that can destroy their careers and ruin their lives.

This is not simply an injustice to those who have tried to keep this country safe, it is a danger recklessly imposed on future Americans whose safety cannot always be guaranteed by sweet and gentle measures against hardened murderers.

Those who are pushing for legal action against CIA agents may talk about "upholding the law" but they are doing no such thing. Neither the Constitution of the United States nor the Geneva Convention gives rights to terrorists who operate outside the law.

There was a time when everybody understood this. German soldiers who put on American military uniforms, in order to infiltrate American lines during the Battle of the Bulge were simply lined up against a wall and shot-- and nobody wrung their hands over it. Nor did the U.S. Army try to conceal what they had done. The executions were filmed and the film has been shown on the History Channel.

So many "rights" have been conjured up out of thin air that many people seem unaware that rights and obligations derive from explicit laws, not from politically correct pieties. If you don't meet the terms of the Geneva Convention, then the Geneva Convention doesn't protect you. If you are not an American citizen, then the rights guaranteed to American citizens do not apply to you.

That should be especially obvious if you are part of an international network bent on killing Americans. But bending over backward to be nice to our enemies is one of the many self-indulgences of those who engage in moral preening.

But getting other people killed so that you can feel puffed up about yourself is profoundly immoral. So is betraying the country you took an oath to protect.

Sorry, Anti-Trumpers, It Looks Like the DC Circuit *Is* Concerned Over Flynn Judge’s Bias
Matt Vespa

Katie Pavlich
Based on These New FBI Docs, It's Hard to Not See This as a Spy Operation Against Donald Trump
Matt Vespa
The ACLU Comes Out In Support of 'Dismantling the Department of Homeland Security'
Julio Rosas
President Trump Reveals Two Potential Locations For His Convention Speech
Katie Pavlich
Teachers React to Cuomo's Decision to Reopen Schools This Fall
Cortney O'Brien