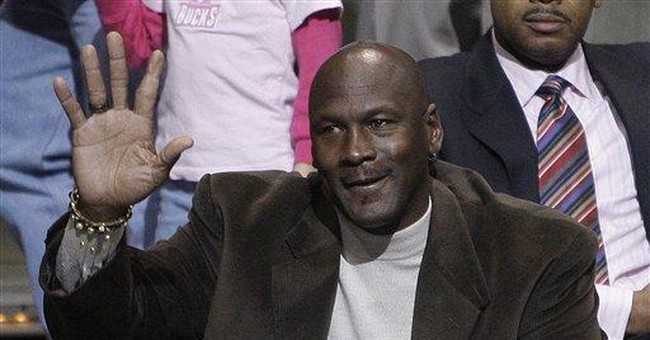 Sometimes, when I hear about "disparities" and "inequities," I think of a disparity that applied directly to me-- the disparity in basketball ability between myself and Michael Jordan.

When I was in school, I was so awful in basketball that the class coach wouldn't even let me try out for softball, at which I was actually pretty good.

I was more than forty years old before I ever got the ball through the basket. It wasn't during a game. The basket was in my brother's backyard and I was just shooting-- unopposed-- from practically right under the basket. The only pressure on me was that my little nephew was watching.

After making that one basket, I never took a basketball in my hands again. I retired at my peak.

Think about it: Michael Jordan made millions of dollars because of having a talent that was totally denied to me. Through no fault of my own, I had to spend years studying economics, in order to make a living.

Most discussions of "disparities" and "inequities" are a prelude to coming up with some "solution" that the government can impose, winning politicians some votes in the process. How could the disparity between Michael Jordan and me be solved?

We could change the rules of basketball, in order to try to equalize the outcomes. Michael Jordan could be required to make all his two-point shots from beyond the three-point line, with five players opposing him and no one on his side. A three-point shot could require him to stand under the basket on the opposite side of the court and shoot from there.

Meanwhile, I could make two-point shots from a spot half the distance from the foul line to the basket, and of course without any other players on the court to distract me. Any shots I might make from back at the foul line would count as three-pointers.

Even under these conditions, you would be better off betting your money on Michael Jordan. But, conceivably at least, we might change the rules some more to make the results come out less lopsided, in order to create "social justice."

The problem with trying to equalize is that you can usually only equalize downward. If the government were to spend some of its stimulus money trying to raise my basketball ability level to that of Michael Jordan, it would be an even bigger waste of money than most of the other things that Washington does.

So the only way to try to equalize that has any chance at all would be to try to bring Michael Jordan down to my level, whether by drastic rule changes or by making him play with one hand tied behind his back, or whatever.

The problem with this approach, as with many other attempts at equalization, is that it undermines the very activity involved. Basketball would be a much less interesting game if it was played under rules designed to produce equality of outcomes.

Attendance would fall off to the point where neither Michael Jordan nor anyone else could make a living playing the game.

The same principle applies elsewhere. If you are going to try to equalize the chances of women getting jobs as firefighters, for example, then you are going to have to lower the physical requirements of height, weight and upper body strength.

That means that you are going to have more firefighters who are not capable of carrying an unconscious person out of a burning building.

Most activities do not exist for the sake of equality. They exist to serve their own purposes-- and those purposes are undermined, sometimes fatally, when equality becomes the goal.