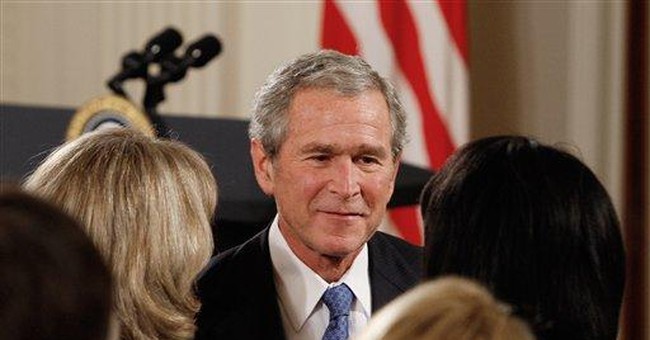 Whatever history's verdict on the Bush administration might be, it is likely to be very different from what we hear from the talking heads on television or read from the know-it-alls on editorial pages.

President Bush's number one achievement was also the number one function of government-- to protect its citizens. Nobody on September 11, 2001 believed that there would never be another such attack for more than seven years.

Unfortunately, people who are protected from dangers often conclude that there are no dangers. This is most painfully visible among those Americans who are hysterical over the government's intercepting international phone calls, in order to disrupt international terrorist networks.

That a President of the United States protected us from deadly enemies may not seem like much of an accomplishment to some. But it may be more fully appreciated when we get a President who eases up on that protection, in order to curry favor at home and abroad.

We can only hope that it will not take the sight of an American city lying in radioactive ruins to wake people up to the dangers that George W. Bush protected us against, despite an unending chorus of carping.

No one in his right mind would say that the Bush administration was flawless. But many of their worst political mistakes were the kinds of mistakes that decent people often make when dealing with indecent people, both domestically and internationally.

The idea with which President Bush arrived in Washington, that he could gain bipartisan support by going along with the Democrats, and not vetoing any bills that Congress passed, ignored the fact that it takes two to tango.

Having proclaimed his goal as bipartisanship, it was he who was blamed when the bipartisanship failed to materialize. Wooing Ted Kennedy and going along with massive government spending did not stop Kennedy from getting up in the Senate and loudly proclaiming that Bush "lied, and lied and lied!" about Iraq.

Whatever the merits or demerits of going to war against Saddam Hussein, the question whether he had weapons of mass destruction immediately at hand makes a better talking point than a serious argument.

President Bush was not the only national leader who thought Saddam Hussein had such weapons, nor were such weapons the only reason why the Iraqi dictator posed a continuing danger that all diplomatic efforts, over more than a decade, had failed to extinguish.

This issue can be debated, and no doubt will be debated for years, if not generations, to come. But the irresponsible charge that "Bush lied" for some nefarious purpose-- to trade "blood for oil" or to generate business for Halliburton, for example-- is more than a slander against him. It undermines our whole nation and gives comfort to our enemies around the world.

Domestically, the Bush legacy leaves a lot to be desired. Going along with the McCain-Feingold bill restricting free speech was perhaps the Bush administration's biggest dereliction of duty. Maybe they figured that they could pass the problem along to the Supreme Court to stop it, since this bill so clearly violated the First Amendment to the Constitution.

But the Supreme Court was also guilty of a dereliction of its duty and let the McCain-Feingold bill stand.

Advocating amnesty for illegal aliens was another political disaster, especially when accompanied by denials of the obvious.

Although the Bush administration went along with the chorus of calls for promoting home ownership among people who could not afford home ownership, President Bush at least sounded a warning while others were still pushing lenders to lend to people who proved unable to repay their loans.

A mixed bag? Aren't we all? But an honorable man.