Thomas J. Farnan
|
Posted: Oct 09, 2017 12:25 PM
Share   Tweet
The opinions expressed by columnists are their own and do not necessarily represent the views of Townhall.com. 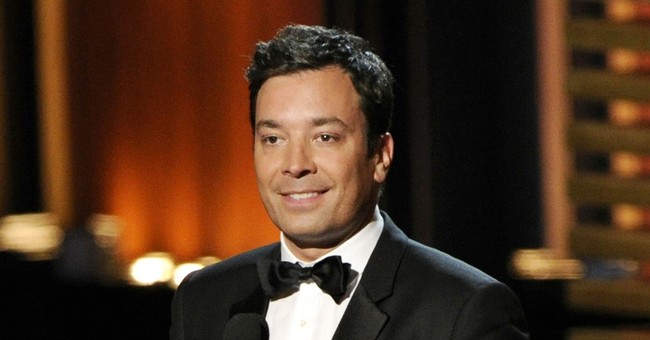 Last week, a white female reporter asked the black quarterback of the Carolina Panthers a question about how one of his receivers runs routes. The question was this: “Does that give you a little bit of enjoyment to see him kind of truck-sticking people out there?”

The word “truck-stick” is defined by the Urban Dictionary as, “For one person to knock another over.” It is derived from the video game “Madden 2006” and describes someone using a joystick to knock down football player avatars.

It is objectively funny when people use jargon they associate with people they’re talking to. Like the time in the 90s when you explained your Palm Pilot to your uncle, and he spent the rest of the day saying “stylus” to illustrate his tech savvy.

The quarterback, Cam Newton, thought something was funny about the question. It is the most basic freedom to decide for yourself what is funny. Conversely, it is an act of oppression to prohibit laughter.

The movie Cool Hand Luke was about a sadistic prison warden breaking a prisoner who laughed a lot. Just like the warden in that movie might have said, the sports media turned to Mr. Newton and seethed, “Wipe that smile off your face, son.”

He complied and apologized, but only after Dannon Yogurt ended its sponsorship relationship with him. That one had to hurt.

I will leave it to the professors in black studies programs to analyze the spectacle of mostly white male sports reporters forming an angry mob to defend a white woman against disrespect shown by a young black man.

This will focus instead on the killjoys who are prohibiting laughter and the comedians who are doing something about it.

Comedians are in a tough spot. The pinnacle of their profession is to have a late-night show where they make fun of Republican presidents and Republicans in general during Democratic administrations.

This Republican president, though, is hard to make fun of because he is difficult to distort. He spent a lifetime fashioning himself into a valuable brand: Trump this, Trump that. Like any brand, he has deliberate embellishments that make exaggeration impossible.

Add to this the fact that, just like Cam Newton, comedians are not permitted to laugh at prohibited subjects, and the funniest thing happening now is how the president is trespassing upon all kinds of untouchable things.

A good example is when the president tweeted anger at a Puerto Rican politician who was dissatisfied with the abundant aid that had arrived from the United States since the recent hurricane.

It was a set up that had all the built-in elements of funny. Theoretically, the comedians could have riffed off that.

Late-Night Comedian: “Did you see that a mayor in Puerto Rico complained about the billions of dollars in aid we are sending there?”

Late-Night Comedian: “Yeah, unbelievable right? If a Tsunami hit the Ohio River, I bet the residents in the distressed towns of West Virginia would see lots of crates of food and medical supplies marked ‘Shipped from: Puerto Rico.’”

Late-Night Comedian: “Am I right?”

Comedians are not allowed to make a joke like that, though. The warden would tell everyone to wipe the smiles off their faces.

In response, late-night comedians have stopped telling jokes and instead are issuing political scolds about the issues of the day.

I have to believe it is a put on – a routine. By acting like pitchforked moralists, comedians are illustrating the stupidity, illogic, and self-absorption of political correctness.

They are mocking their oppressors by becoming just like them.

Take Jimmy Fallon. He invited Hillary Clinton onto his show and had his writers read love letters they wrote to her that were over-the-top insipid. It could not have been serious. They were obvious parodies of the nice things comedians are required to say about Democrats.

I do not mean to single Jimmy Fallon out for praise. Most of the late-night hosts act like medieval minstrels strumming happy songs to the ruling class.

Subtle, perhaps, but a brilliant attack on their oppressors who try to control laughter. Take their diktat to its natural conclusion, where nothing is funny anymore.

Viewed this way, it is the greatest piece of performance art since Andy Kaufman was pretending to be a wrestler.

Way to stare into the teeth of the speech police, comedians, and to have enough courage to truck stick them. You are truly making the world a better place.