Roe v. Wade Must Meet Its End at Supreme Court

Thomas Glessner
|
Posted: Aug 09, 2021 12:01 AM
Share   Tweet
The opinions expressed by columnists are their own and do not necessarily represent the views of Townhall.com. 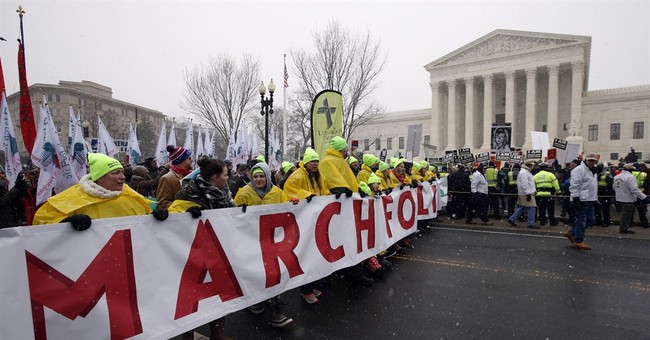 The Supreme Court of the United States will hear arguments in October concerning the constitutionality of a Mississippi law that bans abortion after 15 weeks of pregnancy. It is anticipated that SCOTUS will either reverse Roe v. Wade or cut its heart out, rendering a decision with no real precedential value. Roe opened the door for abortion on demand and the subsequent deaths of more than 64 million unborn children. The time has come for SCOTUS to deal Roe a death-blow and put an end to abortion in the US.

In anticipation of this upheaval in the legal foundation of abortion, pro-life activists are planning strategies to be more effective than ever in a post-Roe environment. Last week, more than 200 such national leaders met in Virginia Beach to discuss and plan for this coming reality.

The training program was sponsored by the National Institute of Family and Life Advocates, or NIFLA, which has a network of more than 1,600 member pro-life pregnancy centers. Of these, more than 1,300 operate as medical clinics providing key medical services such as ultrasound diagnosis of pregnancy. In attendance were lawyers, physicians, medical professionals, management executives, volunteers, and board members of pro-life pregnancy centers.

There are more than 2,500 pro-life pregnancy centers nationwide that provide alternatives to abortion services, empowering mothers considering abortion to choose life. These life-affirming agencies have a major impact in reducing abortion in their community and creating a culture of life in America.

According to a recent study by Charlotte Lozier Institute, pro-life pregnancy centers provided more than $266 million in services to their clientele in 2019 — the vast majority of whom are seriously considering ending their pregnancies through abortion. Such services, provided at no cost, include:

-Medical services such as pregnancy diagnosis, ultrasound confirmation of pregnancy and STI testing and treatment

-Referrals for low-cost or free legal, medical, and counseling services

The most impressive thing about the work of pro-life pregnancy centers and medical clinics is that their work is primarily supported through private donations, as opposed to government funds. Many volunteers that believe life is a better choice for any mother considering abortion provide countless hours of work, love and devotion for mothers coming to these centers. Trained medical staff, including nurses and doctors, also frequently donate their time to support women, babies and families.

One would think that the work of these centers would be hailed by all regardless of a person’s political view on abortion. Not so. For decades, the abortion industry, led by Planned Parenthood, has berated these agencies as “fake,” “fraudulent,” and “deceptive.” The multi-billion dollar movement of abortion proponents has gone after pregnancy centers in the media as well as state legislatures and the courts.

This onslaught against pro-life centers reached fever pitch when in 2015, California passed a law that required pro-life medical clinics to post on the walls of their office’s signs that promoted abortion and advised their patients how to obtain a state-funded abortion. SCOTUS had the last word on this attempt in its landmark ruling of NIFLA v. Becerra. In this ruling, the court held that such mandates violated the free speech rights of pro-life pregnancy centers and all Americans.

Now, SCOTUS is faced with another critical case regarding abortion. The overturning of Roe or a decision that cuts out its heart will clearly create major disruptions around the nation. The pro-abortion crowd and their woke movement supporters will angrily protest Roe’s loss of power and grip on the American public.

This fact was clearly in the minds of the pro-life activists who gathered in Virginia Beach last week. These dedicated leaders showed a deep resolve to meet the challenge which lies ahead.

After a significant victory by the Allied forces in World War II, Winston Churchill remarked, “This is not the end. It is not even the beginning of the end. But it is, perhaps, the end of the beginning.”

The same will be true of the demise of Roe, which many feel is imminent. The cultural battle for the sanctity of life will become more intense in the months and years ahead. In the end, respect for innocent human life will prevail and a culture of life will become reality in America.