Make the VA Great Again: The Road Ahead for Secretary Wilkie

Terry Schilling
|
Posted: Sep 24, 2018 12:01 AM
Share   Tweet
The opinions expressed by columnists are their own and do not necessarily represent the views of Townhall.com. 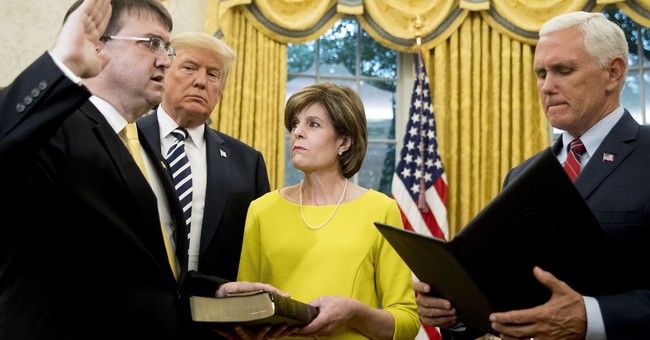 One of the most frequently repeated mantras of President Trump’s 2016 campaign was “drain the swamp,” and perhaps no federal agency better epitomizes the swamp these days than the Department of Veterans Affairs. The VA has been plagued by a seemingly endless number of scandals, the most recent of which – involving improper use of taxpayer money for personal travel – led the president to fire VA Secretary David Shulkin earlier this year. And, as has become tradition at the VA, Shulkin’s successor, Robert Wilkie, has inherited the task of cleaning up quite a mess.

It would be overwhelming enough if Wilkie had merely to address the VA’s notoriously poor quality of health care – a well-documented problem stemming from distressingly widespread incidents of incompetence and malfeasance. However, the VA’s problems have only grown in recent weeks. For example, just last month an inspector general’s report revealed a backlog of more than 238,000 appeals cases on veterans’ disability rulings, a development leading to delays spanning several years for thousands of veterans in receiving final decisions on their cases. That’s not even counting the backlog on initial disability benefits claims, which a report this month suggested may be much higher than the VA’s official total of 86,000.

And to make matters worse, another inspector general report released last month found that VA officials didn’t follow proper procedures for processing claims of sexual assault victims in the military over a 6-month period last year. According to the report, benefits may have been wrongly refused in more than 1,300 cases, likely causing additional trauma to assault victims who ought to have had the agency’s full support. For a department already reeling from a mountain of bad publicity, this was decidedly not a good look.

Fortunately, efforts are already underway to begin rectifying these numerous problems. In order to begin addressing the appeals logjam, President Trump last year signed the Veterans Appeals Improvement and Modernization Act, legislation which would create a fast track for the appeals process and take advantage of new technologies. And while the legislation does not take effect until 2019, it is important Secretary Wilkie take steps now in preparation to fully implement the law.

In addition, in June, the president signed into law the VA MISSION Act, whose many critical reforms include provisions to consolidate and strengthen community care programs into a single program, expand eligibility for the Family Caregivers Program, and give veterans access to walk-in care. Last year, President Trump also signed the VA Accountability and Whistleblower Protection Act, making it easier to discipline bad actors, including senior executives, and strengthening protections for individuals who come forward to identify problems occurring within the VA.

However, much more work is still required if the VA is to be fully rehabilitated. For example, this past summer, veterans in California suddenly found their education options severely restricted when the state’s approving agency decided to suspend the eligibility of a large group of colleges from receiving GI Bill reimbursements. For those veterans relying on GI Bill benefits to attend these schools, the decision was a serious blow which threatened their continued education.

Fortunately, thanks in large part to an intervention by the VA, California’s approving agency has since reversed its decision, reinstating eligibility for nine public and non-profit schools. However, a number of for-profit schools who have been certified by recognized state and accrediting bodies still remain in limbo due to a lack of VA support, leaving the future of many veterans’ educations in doubt. This also gives the appearance that the VA has different standards for non-profit and for-profit schools. For an agency still under the dark shadow of scandal, moving to resolve this situation and restore eligibility to for-profit schools would no doubt help rebuild much of the good will it lost in the mismanagement of recent years -- as well as better serve the veterans who have chosen for-profit institutions to meet their educational needs.

Of course, this is merely one small part of the much larger reformation project which faces Secretary Wilkie. Nevertheless, veterans and other Americans alike will be watching closely in the hopes that the VA’s newest leader will be up to the challenge. For the sake of our veterans, as well as “draining the swamp,” let’s hope he succeeds.