Terry Paulson
|
Posted: Jun 25, 2018 12:01 AM
Share   Tweet
The opinions expressed by columnists are their own and do not necessarily represent the views of Townhall.com. 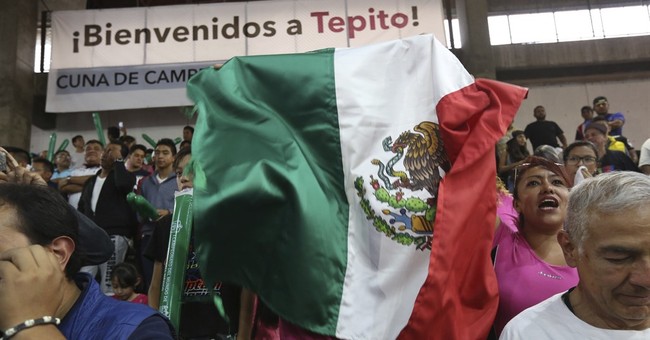 Even without the U.S. soccer team competing in the World Cup, watching the competition in Russia is still compelling. On Sunday, June 17th, Mexico faced Germany, the defending 2014 FIFA World Cup champion.

The Mexican players aggressively took the game to the top-rated Germans."Chicharito" Hernandez started the decisive counterattack that allowed “Chucky” Lozano to score the only goal Mexico would need. They stunned the reigning champion and their shocked fans.

I cheered for Mexico watching the Mexican fans celebrating on the streets of Mexico City. Why not? Our Southern neighbors beat the heavily favored reigning champions!

Why’s this worth a column? I’m a Trump voter pleased with how he’s delivered on his campaign promises. I find California’s sanctuary status unconstitutional. I want Congress to provide the funds for Trump’s border wall. But I still want the best for Mexico—their government, their people, their businesses, and their World Cup team! I also want the best for Central American countries.

I wish them well in ridding their countries of MS-13 gangs, the drug cartels, and their corrupt politicians. They deserve their own “Dream!” The undocumented now flooding our border shouldn’t have to cross a border to live out their dreams.

The current uproar over children being separated from their parents after crossing the border just highlights our current dysfunctional immigration system. Currently, those caught with children can’t effectively be deported, detained, or prosecuted. That resulted in what’s called “catch and release;” those caught crossing are released into America. This has been a magnet for illegal aliens schooled on what to say. They claim credible fear and ask for asylum. Even the cartels, gangs, and coyotes have grabbed children to facilitate border crossings. What we’re doing isn’t working.

Trump’s administration is now committed to a “catch and hold” policy that’s no longer separating the children from parents, but it’s detaining families instead of releasing them into the country. Parents could go to established port of entry locations to be processed, but by crossing illegally they’re creating a problem for themselves, their children, and our country.

People ask, “But don’t you care about the children?” Of course, care enough to pass a law to allow them to be detained together for the time it takes to accept or expedite their deportation. But also care about children of our low-income citizens whose parents experience lower wages because of the presence of undocumented workers. Care for the potential immigrants waiting years with their children for the chance to come to America only to see illegal immigrants cut in line.

It’s time for Democrats to help Congress and President Trump pass a workable immigration bill. President Trump has tweeted the challenge: “Any Immigration Bill MUST HAVE full funding for the Wall, end Catch & Release, Visa Lottery and Chain, and go to Merit Based Immigration. Go for it!”

Americans want immigrants from all countries to follow the rules. Americans welcome immigrants but deserve the right to welcome them on its terms. America has always functioned more as a meritocracy that puts a premium on freedom, personal responsibility, and free-enterprise.

Merit-based screening ensures immigrants are more likely to succeed. America benefits from the skills and drive immigrants bring with them. There are many Americans of Hispanic origin who have weaved their dreams, skills, and drive into our rich American Mosaic. Like all immigrants; let all earn entry legally.

Instead of illegally trying to enter America, let them adopt their own Trumpism—Make Mexico Great Again! Their soccer team certainly did! They should stay in their country of origin and challenge their responsible fellow citizens to take back their streets and their government. Just as with the Mexican soccer team; we’re ready to cheer them on. Mutually beneficial commerce and the resulting economic growth will make all involved even stronger. Let our aid no longer go to corrupt politicians, but to promote economic growth and free enterprise micro loans.