Terry Paulson
|
Posted: Sep 15, 2017 12:01 AM
Share   Tweet
The opinions expressed by columnists are their own and do not necessarily represent the views of Townhall.com. 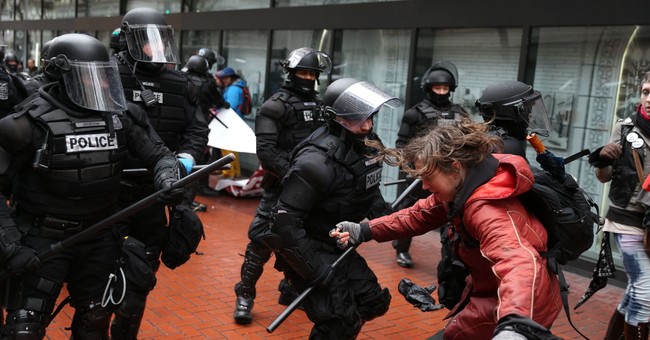 Sometimes, one insight in a sermon or presentation captures your mind. A recent sermon by Deacon Lynn Bulock at New Hope Lutheran Church did just that. She shared an insight on human connection from the work of Brené Brown, a writer and social work professor in Houston. Brené’s popular TED talk on vulnerability and her book, Rising Strong, are worthy of study.

Brené wrestled with the question: Do you believe that for the most part, people are doing the best that they can? She excludes serial killers and terrorists, but includes everyone else. After initially rejecting the idea, she asked the question to others. She found there was a stark difference between those who answered “Yes” and those who said “No.”

In general, she found that the people who said “no” were quick and harsh to judge themselves as well as others. The “yes” answer came from people like Brené ‘s husband who observed: “All I know is that my life is better when I assume that people are doing their best. It keeps me out of judgment and lets me focus on what is, and not what should or could be.”

Lynn confessed, “It was that phrase, ‘keep me out of judgment,’ that made me want to grumble, and maybe even throw things. It was calling me to go where I didn’t want to go at all. If people are, in general, doing the best that they can, I can’t draw that dividing line between me and ‘those people’ I struggle with.”

In a world struggling with polarized divisions—race, politics, religion—it is far too easy to point fingers at how judgmental those “other” people are! Those “Trump” or “Hillary” supporters are idiots, deplorable, unpatriotic, blind partisans…. The words sting and invite more demonstrations and Facebook attacks than constructive dialogue on our differences.

Elbert Hubbard observed a century or more ago, “If you can’t answer a man’s argument, all is not lost, you can still call him vile names.”

Democratic Congressman Peter Welch said something I wish more politicians could echo: “There’s a tendency in politics to attribute bad motivation much too quickly, and the sooner you attribute bad motivation to someone you disagree with, the harder it is to find some common ground to make some progress that would give people confidence that you got it more right than wrong.”

Many who voted for President Trump don’t even make comments about their support in conversations or on social media for fear of being attacked. Could it be that supporters of President Obama had similar fears? We are blessed to live in a country where we are free to vote and support for the politicians who best match our stand on issues and political priorities. Difference is built in; demonizing those who disagree need not be.

Have you seen young children dragged to demonstrations to shout angry slogans and carry signs you know their parents provided? Of course. It happens on many issues. Some children find a way to mature beyond the yelling to connect with those they previously demonized.

Megan Phelps-Roper, grew up as a member of the Westboro Baptist Church, the church that demonstrates against homosexuals and at soldiers funerals with signs like, “Thank God for Dead Soldiers.” In recent weeks, some Westboro tweets speak of Hurricane Irma as a “glorious, wrath-filled warning from the Lord God.” Their opinions are rejected by the Baptist church.

In a powerful TED talk, Megan explains why she left Westboro Baptist. Through the loving acceptance with those she grew up attacking, she found that stating one’s opinion does not justify being rude. She left the church and has taken a stand for civil discourse. Her advice: 1) Don't assume bad intent; 2) Stay calm; 3) Ask good questions, and then really listen and hear the response; and 4) Make your argument. Don't assume that you are right, and the other person should know why.

It’s time in America for more empathy and tolerance for differences. Tolerance does not mean having to agree. Tolerance means making room for celebrating and defending our God-given freedoms that are enshrined in our Bill or Rights and Constitution even when we don’t like or agree with what is being said.

Dr. Eunice Parisi-Carew, author of Collaboration Begins with You, writes: “The key to handling conflict is to make sure people understand it's okay to have an opposing view.” After all, most are doing the best they can to make political choices they feel will keep America great.