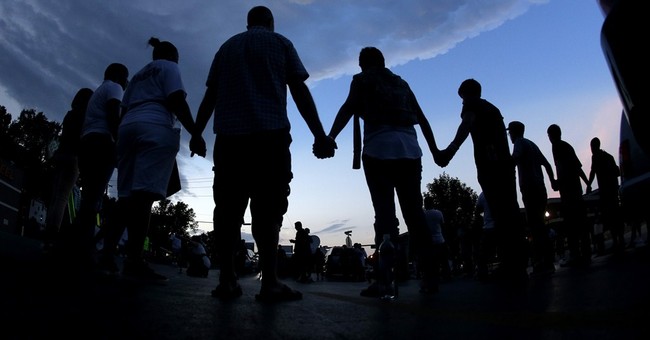 Michael Brown was a college-bound, black teenager who no longer has an opportunity to forge a future he could be proud of. He is dead, allegedly killed execution style after a confrontation with a policeman. Darren Wilson is a white police officer, who after six years of blemish-free service to his community, used deadly force to allegedly defend himself in an escalating confrontation with an unarmed teenager. Do you know which version is closer to the truth? The search for justice is always difficult. In the rush for judgment in Ferguson, Missouri, it has become all but impossible.

As coverage of the racial crisis continues, I'm saddened by how far we've strayed from the values that have made America what it is. One such core American value is E Pluribus Unum—out of many one. From our beginning, out of the mix of races and cultures our melting pot has worked to forge one people. We've called ourselves Americans. We may celebrate our unique nationalities, but we're still Americans first.

Lincoln would say, “I don't know who my grandfather was; I am much more concerned to know whathis grandson will be." America has not and never will perfectly live up to this or any value. It took a civil war, hard-fought civil rights legislation, and tumultuous demonstrations to even begin to rid America of the curse of slavery.

But I fear that in America, E Pluribus Unum has given way to E Pluribus Discidium. Discidium is a Latin word meaning division, disagreement, or a tearing apart. The more politicians have used identity politics, the more Americans have emphasized our differences and our "unique" rights. We've put cultural diversity and minority rights on politically correct pedestals. When you add race-baiting leaders and a conflict-loving media, America is now more divided than ever.

Years ago, in the midst of racial tension over the OJ Simpson trial verdict, I shared a five-hour, cross-country flight with Brother Clarence, a 97-year-old black man whose loving presence was both disarming and inspiring.

Brother Clarence was the son of a slave, the last son from his father’s last wife. His father had been freed in Alabama as a child. Asked about his experiences as a young slave, his father refused to talk about it, saying: “Don’t worry about what happened. Be proud that you're free. I never met a man who with a smile on my face and an outstretched hand would not treat me with respect. If they don't, they're not worth knowing anyway.” Brother Clarence confessed that he worried about his great-great-grandchildren, “They’re angry. They don’t want to listen to my advice about smiling or shaking hands.”

Welcome to Ferguson, Missouri. With black teens in the area facing 50% unemployment, they need jobs, not more demonstrations. Unfortunately, throwing stones at the police, cursing at potential employers, and destroying small businesses does not make a compelling impression for the jobs they so desperately want.

With calmer nights beginning to return, there is once again business activity in Ferguson. But one of the business signs speaks to the problem we face. The hand-written sign on the plywood replacing the window read, "OPEN BLACK OWNER." Is that the America we want where only white-owned stores should be attacked?

No matter what happened in that tragic confrontation, there is no justification for looting and violence. Blacks can point to white-on-black attacks. Whites can list black-on-white attacks. For law-abiding Americans of any race, such crimes deserve fair trials and true justice.

Victor Frankl, the holocaust survivor, said it best, “There are only two races, the decent and the indecent.” As an American, we're challenged to care less about the color of a man's skin, and more about a man's behavior. In America, there should be no special laws to protect one race; all should be held to the same standard. Do the crime; serve the time. We aspire to equal justice for all--Whether for a black teenager or a white police officer.

There are some people we no longer even see the color of their skin. They're our co-workers, fellow students, fellow parishioners, beloved entertainers or sports figures, close friends or even spouses. Race means little when we get to know people.

Instead of marching against the police, the regular folks of all races in Ferguson should stand with the police to take back their community from the interloping hoodlums who are doing what they can to destroy their city. It’s time for some disarming smiles and outstretched hands on both sides of our racial divide. Let's return to being Americans first. Let's give time for justice to prevail.