Terry Jeffrey
|
Posted: Nov 25, 2020 12:01 AM
Share   Tweet
The opinions expressed by columnists are their own and do not necessarily represent the views of Townhall.com. 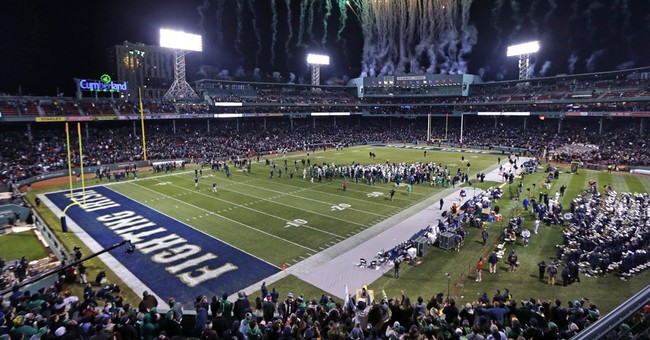 Some newspapers in the Midwest in 1920 referred to the Notre Dame football team not as the Fighting Irish but as "the Catholics."

Notre Dame's star player, however, was not one.

George Gipp grew up in a small northern Michigan town, where he did not play high school football and his father was a Baptist pastor.

He arrived in South Bend in 1916 as a baseball prospect.

Joseph Meyer -- who later became the football coach at Xavier -- was a senior baseball player at Notre Dame when Gipp was a freshman. In 1920, he recalled how Knute Rockne discovered his ultimate star.

"One day, he wandered out on the gridiron and began kicking the ball around while the team was practicing," Meyer said of Gipp. "Someone showed him how to dropkick, and it wasn't long before he booted a field goal from the 62-yard line.

"His boot was reported to the coaches," Meyer recounted. "They snared him right away and put a uniform on him."

By his senior year, sportswriters were hailing Gipp as the greatest player in the game.

The New York Herald explained why in a story published after the 1920 Army-Notre Dame game.

"Gipp played the greatest individual game seen at West Point since the afternoon when Jim Thorpe of the Carlisle Indians defeated the Cadets single handed and single footed," the paper said.

"The Army could not stop this man," it said.

But something else almost did stop Gipp from playing his senior year.

"Gipp was recently dismissed from the university by President J.A. Burns and the faculty because of insufficient work in academic subjects," the South Bend Tribune reported on March 18, 1920.

But four days before the opening game of the 1920 season, Notre Dame reinstated Gipp.

"The ineligibility of George Gipp ... was cleared up at a meeting of the faculty athletic board held yesterday afternoon," the South Bend Tribune reported on Sept. 29. "Gipp, who returned to school last week, was granted a hearing before the board, and on a presentation of a statement of satisfactory work in his June examinations from the law department his disqualification was removed."

Toward the end of the third quarter, the Hoosiers were ahead 10 to 0 -- and for some reason unknown to the fans, Rockne had been playing Norman Barry at halfback instead of Gipp.

Then, when the Irish made it to Indiana's one-yard line on the last play of that quarter, Rockne put Gipp on the field.

"Gipp carried the ball over on the first play of the fourth quarter," the Indianapolis Star reported. Then he kicked the extra point. The score was now 10 to 7.

Indiana then fumbled on its own 33 and Notre Dame recovered.

Gipp completed a 15-yard pass, made two hard runs and led Notre Dame to another touchdown, putting the Irish ahead 13 to 10. (He missed the extra point).

So, why had Rockne pulled Gipp from the game -- and then sent him back out for the fourth quarter?

"Rockne, realizing that something was wrong with his star player, beckoned Gipp to the sidelines in the third quarter and substituted Barry," he said.

Notre Dame had two more games that season -- against Northwestern and Michigan State -- but newspapers reported Gipp was out for the season.

Yet an already-ill Gipp did play against Northwestern at Evanston the next week, when Notre Dame won 33-7.

Rockne later recalled what happened in a conversation with sports writer Grantland Rice, who reported it in his memoir, "The Tumult and the Shouting."

"In our final game against Northwestern, at Evanston, he climbed out of bed to make the trip," Rockne said. "I used him very little in that game."

"But in the last quarter the stands chanted Gipp's name so loud and long that I finally sent him in for a few plays -- on that ice-covered field with the wind off Lake Michigan cutting us all to the bone," said Rockne.

"I got him out of there quick; but after returning to school with a raging fever, Gipp went back to his sick bed," Rockne said. "He never got up. Pneumonia had him backed to his own goal line. He lived barely two weeks."

Rockne also recounted what happened in Gipp's hospital room before he had his own famous final conversation with the young man.

"Shortly before he went, Father Pat Haggerty baptized him into the church," Rockne said.

The day after the Gipper died, Father John O'Hara -- who later became the president of Notre Dame and then the Cardinal Archbishop of Philadelphia -- gave a more detailed account.

"What wrought the miracle of this beautiful death?" asked O'Hara at a student Mass. "It was the reward of Notre Dame, the Blessed Mother, for a humble service wrought in her honor in a humble way. George Gipp loved this school which is dedicated to her honor; he strove in his own way to add lustre to its tradition; and although we did not think of George as a deeply religious man, his inmost thoughts came to the surface when he faced death."

"You offered a novena of communions for him and when informed of it he said: 'Tell them to keep it up,'" said O'Hara. "On the day the novena ended he asked to become a member of your church and the following day was baptized. He lingered on, sustained only by prayer, and offered his sufferings to God.

"On the afternoon before his death," said O'Hara, "he became more his real self than he has been for two weeks; and he spoke not of the honors he had received but of his death in the arms of God."