Terry Jeffrey
|
Posted: Jan 15, 2020 12:01 AM
Share   Tweet
The opinions expressed by columnists are their own and do not necessarily represent the views of Townhall.com. 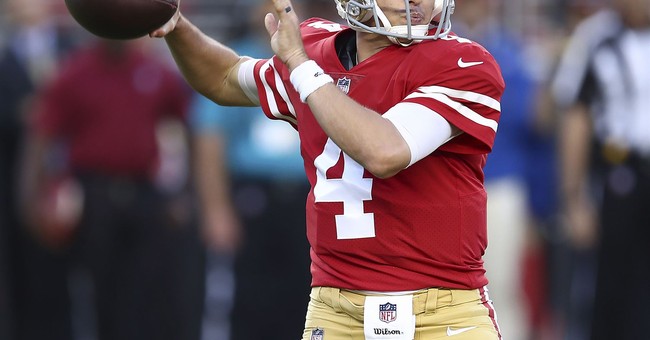 Father Bill McGuire was sitting in the upper level of the press box at Kezar Stadium watching his hometown team play the Chicago Bears.

Things were not going well.

The 49ers fumbled the opening kickoff, and the Bears swiftly scored. Less than two minutes into the game, the Niners were down 7-0.

Chicago then forced a punt and scored again. Now, it was 14-0.

In the lower level of the press box, Tony Morabito, founder and principal owner of the 49ers, sat with his wife, Josephine, and his brother and partner, Vic.

He could not have been happy.

Morabito -- who played football at St. Ignatius High School in San Francisco and for one year at Santa Clara -- had helped force the National Football League to become a truly national league.

Twice during World War II, he had petitioned the NFL to let him start a team in San Francisco -- at least after the war had ended.

"Morabito saw the rise of football in the area and presented a case to birth a professional football team in 1942 to National Football League officials, but he was quickly ushered out of the meeting room with firm politeness," says a biography posted on the 49ers website.

In January 1944, he went to an NFL meeting in Chicago and was once again rebuffed.

"'We were invited to return in April and plan to do so,'" San Francisco Examiner sports editor Curley Grieve quoted Morabito as saying in an article published Jan. 23, 1944.

"The attitude on granting a franchise now was divided," Morabito said. "None said he was against San Francisco's entry into the league. But some were cooler on such a drastic expansion than others."

At the April 1944 meeting -- held in Philadelphia -- the owners again turned down Morabito and other prospective new owners.

"The league does not want to declare itself at this time on expansion," then-Commissioner Elmer Layden told the Chicago Daily Tribune. "We feel that there is no hurry in deciding which way we want to go at a time when we have many current problems to solve."

That, apparently, was the last straw for Morabito.

As Stan Grosshandler has described it in The Coffin Corner, Chicago Tribune sports editor Arch Ward invited a group a wealthy football fans -- who did not own NFL teams -- to meet in St. Louis in June 1944.

The agenda: Start a new league.

Five years later, the All-America conference folded, and the 49ers joined the NFL -- along with the conference teams from Cleveland and Baltimore.

Morabito had pushed a hesitant NFL all the way to the shores of San Francisco Bay.

But just two years later, he encountered another obstacle that threatened his ownership of the team.

"The doctors have told the volatile Tony that they will not be responsible if he continues to concern himself with the fortunes of the 49ers," Sullivan wrote.

Morabito ultimately decided not to sell the team.

"That bespectacled gentleman in the seat alongside that of Tony Morabito at the 49er-Cardinal game today will be Dr. William O'Grady, Morabito's personal physician," wrote Sullivan in his August 24, 1952 column.

"Because of a heart condition," Sullivan said, "Morabito was ordered to sell his interest in the 49ers several months ago. He refused -- but agreed to stay within his doctor's reach during games."

It also turned out that he was within reach of Father McGuire.

At that 1957 game with the Bears, 49ers quarterback Y.A. Tittle snuck the ball into the end zone with about nine minutes left in the half. With the score 14-7, the 49ers lined up to kick off.

"All of a sudden, some of the players standing on the sideline noticed a commotion around Tony's guest box," Hall of Fame running back Joe Perry recalled in Dennis Georgatos' "Game of My Life San Francisco 49ers."

The next day, the Examiner reported what had happened.

"Sitting in the front row of the 50-yard line box, with his wife Josephine on one side and his brother Victor, vice president of the club, on the other, Tony suddenly keeled over," the Examiner said.

Vic Morabito raced onto the field to retrieve Dr. O'Grady.

Someone went upstairs to get Father McGuire.

This heart attack turned out to be fatal.

"The last rites of the Roman Catholic church were administered by the Rev. William McGuire, brother of 49er Publicity Director Dan McGuire," said the Examiner. "The priest was summoned from the upper press box where he was watching the game."

According to the 49ers' website, Morabito's last words were: "Thank you, father."

Two days later, Morabito's family held a rosary for him. Then Father McGuire presided over a high funeral Mass in St. Catherine of Siena Church, which sits in a suburb on the peninsula between San Francisco and Santa Clara.