Terry Jeffrey
|
Posted: Aug 07, 2019 12:01 AM
Share   Tweet
The opinions expressed by columnists are their own and do not necessarily represent the views of Townhall.com. 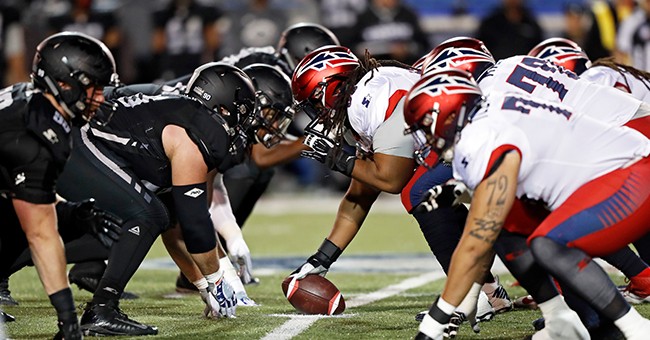 As a mathematics professor at Yale, he had kept a careful eye on college football for years before he felt compelled to speak out.

Eugene Lamb Richards then published an essay in the October 1894 edition of The Popular Science Monthly. It was titled "The Football Situation." (A shorter version of the same essay was published in Walter Camp's 1894 book, "Football Facts and Figures.")

With the 2019 football season about to begin, it is worth recalling what this professor had to say.

"It will surprise many good people, who have been accustomed to hear such an epithet as 'brutal' applied to the game of football that I should claim for it as the first point of superiority over other college athletic sports that it is eminently an intellectual game," he wrote.

Richards sought to rebut football's critics while explaining his belief that football excelled as both an intellectual and moral exercise.

"I hope to prove that with all its faults it is one of the best forms of athletic sport which can be invented; that by no other game or exercise practiced by young men are the players themselves so much benefited as by football," he wrote, "that the colleges ought to be as much interested in keeping it up as are the most enthusiastic football players themselves; that the public, who have boys to educate, ought to acquaint themselves with the subject."

"Watching the games when possible," Richards wrote, "they ought not to allow themselves to be beguiled into condemnations of the sport by sensational writers, who inveigh against it either because they know nothing of it, or because they have determined to know nothing of it, since it does not square with their 'historic and traditional idea' of things suitable to a college."

Football, he argued, is not a simple game. It requires ingenuity, a focused mind and a practical mastery of a complex set of rules.

"A game of football between contestants evenly matched in other respects is won by the superior mental work of the winning team as embodied in the generalship of the captain and the thoughtful work of his men," he wrote.

"In the first place, the rules of the game must be observed by every player," he said. "He must have them thoroughly in mind in order to know what he can do, as well as to avoid what he is not permitted to do."

"These rules are very numerous -- more numerous, I believe, than the rules of any other college sport, and cover a wider sphere of action," he wrote. "The interpretation and application of them in every moment of play calls for no ordinary quickness of mind in a successful player."

The same was true, he argued, of the tactics teams deployed within the confines of these rules.

"It is eminently a game of combinations," Richards wrote. "Individual play is important, but team play is more important. The signals of the captain must be heeded by all the players, even if they seem to be given for only two or three men. Through weeks of preparation these signals have to be studied, to be memorized, to be practiced as thoroughly and faithfully by the men as the laws of any science by successful scholars."

Yet, ultimately, it was the impact football had on the character of the young men who played it that caused this Yale mathematician to admire it so much.

"But great as are the benefits of the sport to the players in mind and body, they are not to be compared to its moral effects," he wrote.

"If there is one virtue most to be desired in a manly character -- without which, indeed, it ceases to be manly -- that virtue is courage," said Richards. "And of the college sports there is not one which cultivates this manly virtue more than football. Neither is the courage required entirely physical. Indeed, the best players feel and see the danger which they brave."

He was convinced that football builds character.

"Strange as it may seem," he wrote, "a good claim can be made of a necessary connection between good character and good football in its best development."

"The best teams at Yale have had not only the best players," he said, "but the most successful teams have contained the most moral and religious men."

While Richards, who graduated in the pre-football era of 1860, had rowed crew for Yale, football was not a mere abstraction for him. His son and namesake served as Yale's football captain in 1884 -- and then went on to become deputy attorney general of New York.

Richards did not believe football was perfect. He believed it needed perfecting -- but that doing so was worth it.

He opposed "mass play," such as the flying wedge, for example, because he thought it "puts a premium on weight and brute force."

Yet 12 years after Richards wrote his defense of football, mass play was prohibited, and the forward pass was legalized.

The sport this Yale mathematics professor considered "eminently an intellectual game" became even more so.