Another Wall That Needs to Fall

Terry Jeffrey
|
Posted: Aug 30, 2017 12:01 AM
Share   Tweet
The opinions expressed by columnists are their own and do not necessarily represent the views of Townhall.com. 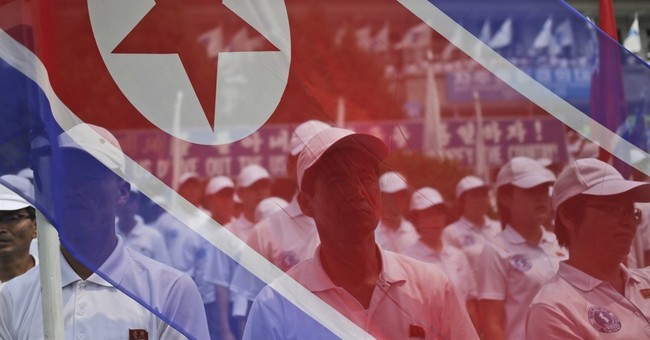 The border in question divides two countries that in some ways are among the most starkly different on earth.

On one side, according to the State Department, is a "constitutional democracy" that engages in "free and fair" elections. On the other is an "authoritarian state" ruled by one "family for more than 60 years."

One side is South Korea; the other is North Korea.

In 1950, the communist regime in the north invaded the south. Acting without a constitutionally required authorization from Congress, President Harry Truman ordered the U.S. military to intervene on the side of South Korea. China intervened on the side of North Korea. The fighting lasted three years.

According to Veterans Affairs, Americans suffered 33,739 battle deaths in the Korean War. Another 103,284 were wounded.

The war ended in 1953 with South and North Korea still divided at the 38th parallel. In the 64 years since then, North Korea has engaged in some isolated attacks and provocations, but it has never dared to invade the south again.

Why did these three successive autocrats refrain from another invasion? Because they were deterred. It would mean the end of their regime.

For years, this regime has been working to develop a nuclear weapons capability -- conducting a series of tests on bombs and missiles. At the end of July, they tested an intercontinental ballistic missile, The New York Times reported, which "appeared capable of reaching the West Coast of the United States." This week, they fired a missile over Japan.

What should the United States do in response to these provocative acts?

"A conflict in North Korea ... would be probably the worst kind of fighting in most people's lifetimes," Mattis warned in May on CBS's "Face the Nation."

"Why do I say this?" he said. "The North Korean regime has hundreds of artillery cannons and rocket launchers within range of one of the most densely populated cities on earth, which is the capital of South Korea."

"But," said Mattis, "the bottom line is, it would be a catastrophic war if this turns into combat, if we are not able to resolve this situation through diplomatic means."

Mattis, moreover, does not downplay the threat.

"It is a direct threat to the United States," said Mattis. "They have been very clear in their rhetoric. We don't have to wait until they have an intercontinental ballistic missile with a nuclear weapon on it to say that now it has manifested completely."

In an Aug. 11 story, The New York Times quoted Sen. Graham, who insisted he is certain President Donald Trump is committed to a pre-emptive war if necessary.

"I am 100 percent sure from a number of conversations that, as a last resort, he would use military force to deny them the capability to strike the homeland with a nuclear weapon," said Graham.

Graham made a similar point on NBC's "Today" show on Aug. 1.

"There is a military option: to destroy North Korea's program and North Korea itself," said Graham. 'He's not going to allow -- President Trump -- the ability of this madman to have a missile to hit America. If there's going to be a war to stop (Kim Jong Un), it will be over there. If thousands die, they're going to die over there. They're not going to die here. And he has told me that to my face."

In an op-ed published earlier this month in The Washington Post, Sen. Ted Cruz presented a wiser course -- reminiscent of the path that brought down the Berlin Wall.

Cruz advocated three things: Stepping up our anti-ballistic missile program to deploy interceptors in space that can knock out ICBMs in the launch phase, choking off the money flowing to the North Korean regime, and bombarding North Korean "political elites" not with weaponry but with the message that "they could have a future in a reunified Korea."

In 1987, Ronald Reagan, the great advocate of an anti-ballistic missile system, stood in Berlin and said: "This wall will fall." It turned out to be one of the most powerful things an American president ever did.