Terry Jeffrey
|
Posted: Mar 10, 2017 12:01 AM
Share   Tweet
The opinions expressed by columnists are their own and do not necessarily represent the views of Townhall.com. 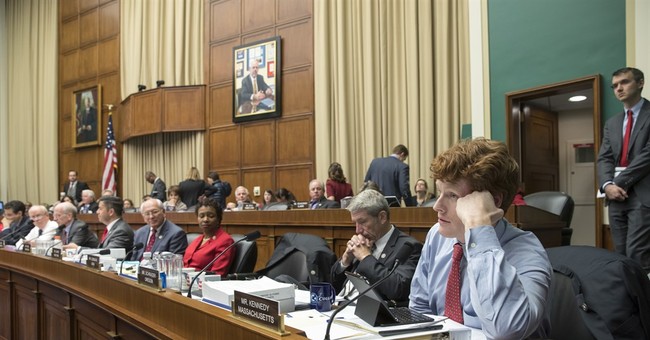 The Affordable Care Act was based on government coercion of individuals and redistribution of wealth. So, too, is the Republican plan to "replace" it.

This section of the law was clinically entitled: "Requirement to Maintain Minimum Essential Coverage."

It was not a choice the government offered individuals. It was a command. It said the "individual shall."

If the "individual" did not comply with this dictate, what did the government do?

"If an applicable individual fails to meet the requirement of subsection (a)," the law said, "...there is hereby imposed a penalty with respect to the individual in the amount determined under subsection (c)."

In his infamous ruling upholding this law, Chief Justice John Roberts concluded correctly that the Commerce Clause does not empower the government to force people to buy health insurance.

It could be construed as a tax, Roberts argued.

Thus a Republican-appointed chief justice preserved the most coercive element of Obamacare.

In redistributing wealth, Obamacare not only expanded the already existing Medicaid program, it also created a wholly new form of federal subsidy aimed at middle-class Americans who earned too much money to qualify for even the expanded version of Medicaid -- but earned less than 400 percent of the poverty level.

Under Obamacare, this class of Americans would receive a subsidy to buy health insurance in the government's insurance exchanges.

This system of redistribution doubled the coercive nature of Obamacare: Not only did the government force people to buy insurance for themselves and their dependents, it forced them to help buy insurance for people they did not know.

Once this system of compounded coercion was enacted, the bureaucracy added yet another layer to it. The Department of Health and Human Services issued a regulation ordering individuals to buy health insurance that covered abortion-inducing drugs and devices and employers to provide insurance that covered these things.

The Obama administration even sought to apply this rule to Christian business owners, Catholic schools and orders of Catholic nuns.

That is where freedom stood in Obama's America.

Then the nation elected a Republican House, Senate and president pledging to repeal and "replace" Obamacare.

This week, the Republican House unveiled its legislation to do just that.

The bill, says a summary published by the House Ways and Means Committee, "would reduce the penalty to zero for failure to maintain minimum essentially coverage; effectively repealing the individual mandate."

But the Republicans would replace the Obamacare penalty with their own penalty -- politely called the "Continuous Health Insurance Coverage Incentive."

This Republican "incentive" would give Americans 63 days to buy health insurance -- or else.

"Beginning in open enrollment for benefit year 2019," says a summary published by the House Energy and Commerce Committee, "there will be a 12-month look back period to determine if the applicant went longer than 63 days without continuous health insurance coverage. If the applicant had a lapse in coverage of greater than 63 days, issuers will assess a flat 30 percent late-enrollment surcharge on top of their base premium based on their decision to forego coverage."

The Republicans intend to replace the Obamacare subsidies with a "refundable tax credit" -- which can be paid to someone who owes no tax.

This subsidy, according to Ways and Means, will be determined by age and income, rising from $2,000 per year per person for individuals under 30 to $4,000 per year per person over 60. Individuals will be eligible for the full credit if they have incomes up to $75,000, and joint filers will be eligible with incomes up to $150,000.

"The credits are additive for a family and capped at $14,000," says the committee's summary.

So, one family that does not pay taxes could get up to $14,000 in cash -- from families that do pay taxes or from newly issued government debt -- to buy insurance the government insists they must buy in 2019 or face a 30 percent surcharge when they do.

Americans who work, support themselves and do not take government subsidies are not the beneficiaries of this Obamacare repeal -- or, that is, this Republican "replacement."