Can Government Force You to Fund the GOP -- Or a Teachers Union?

Terry Jeffrey
|
Posted: Jan 20, 2016 12:01 AM
Share   Tweet
The opinions expressed by columnists are their own and do not necessarily represent the views of Townhall.com. 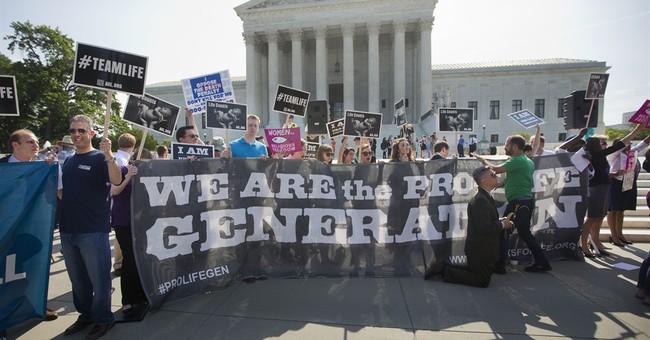 Trending
In a free country, the answer is obvious.

Yet in the Supreme Court last week, it was up to Justice Antonin Scalia to ask the question.

"Is it OK to force somebody to contribute to a cause that he does believe in?" Scalia asked.

Note: Scalia did not ask if it is OK to force somebody to contribute to a cause he does (SET ITAL) not (END ITAL) believe in.

"I wouldn't think, your honor, that you could force Republicans to give contributions," responded lawyer Michael Carvin.

"Yes," said Scalia. "That's what I'm thinking. Could you enact a law? Let's say the national political parties are in trouble, so they enact a law that says all members of the Republican Party, if you want to be a member, you have to contribute so much money. Is that OK?"

Carvin, who was representing a group of public-school teachers challenging a California law requiring them to pay fees to a teachers' union, agreed that it was not. So, who could disagree?

Well, to be consistent, teachers unions and the Obama administration would find it difficult to do otherwise.

Justice Scalia, as he made clear in the oral argument in Friedrichs vs. California Teachers Association, does not believe the government should be able to force a member of the Republican Party, who believes in the party's agenda, to contribute to the party's funds.

But the California Teachers Association -- backed in the court by the Obama Justice Department -- believes the government should be able to force a teacher, who is not a member of the union and does not believe in the union's agenda, to contribute to the union's funds.

Under California law, as the teachers' lawyers pointed out in their brief to the court, once a majority of the employees in a school district say they want a union to be their representative that union becomes the so-called "exclusive bargaining representative" for all teachers in the school district.

The law does not force teachers to join the union, but it does force them to pay part of the union's fees -- the part that covers the union's expenses related to collective bargaining.

The law does not require teachers to pay the part of the union's fees that cover expenses not related to collective bargaining.

The total fee works like a withholding tax. The school district -- which is part of the government -- deducts the money from the teacher's wages and pays it to the union.

Thus, what is supposed to be an adversarial relationship between a union representing workers (i.e. the teachers) and their employer (the government) is in fact a collaboration between the union and the government to extract money from teachers who are not union members -- and ultimately from federal, state and local taxpayers who fund government schools but may not ever send their children to one.

The California teachers who brought their case to the Supreme Court argued that they should not have to pay any fee at all to a union they have not joined.

The lawyers representing these teachers argued in their brief that when a union engages in dealmaking with the government it is inescapably engaged in "political speech" -- speech that government cannot force a nonmember teacher to subsidize.

"Even if this court's precedent did not establish that public-sector bargaining is political speech, it 'flies in the face of reality' to suggest otherwise," they wrote.

Justice Anthony Kennedy, the court's most obvious swing voter on many issues, picked up on this point during the oral argument.

"But it's almost axiomatic," said Kennedy. "When you are dealing with a governmental agency, many critical points are matters of public concern. And is it not true that many teachers ... strongly, strongly disagree with the union position on teacher tenure, on merit pay, on merit promotion, on classroom size?"

"And," Kennedy said a moment later, "agency fees require, as I understand it ... that employees and teachers who disagree with those positions must nevertheless subsidize the union."

Teachers unions have freedom of speech and so do teachers who refuse to join one. Each should pay for their own.