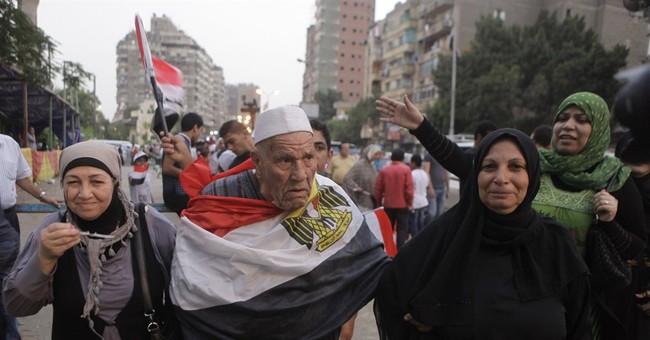 Trending
Five years ago, President Barack Obama traveled to Egypt -- then still governed by the pro-American, secularist authoritarian Hosni Mubarak -- to explain how he believed this Earth could at last become a paradise.

"The people of the world can live together in peace," Obama said at Cairo University. "We know that is God's vision. Now that must be our work here on Earth."

In Obama's view -- although he did point to the threat of terrorist groups such as al-Qaida -- the primary source of recent historical tensions between the West and the Islamic world has been the colonialism and cultural imperialism of the West.

"The relationship between Islam and the West includes centuries of coexistence and cooperation, but also conflict and religious wars," Obama said in Cairo. "More recently, tension has been fed by colonialism that denied rights and opportunities to many Muslims, and a Cold War in which Muslim-majority countries were too often treated as proxies without regard to their own aspirations. Moreover, the sweeping change brought by modernity and globalization led many Muslims to view the West as hostile to the traditions of Islam."

Peace was not at hand for Egypt's 10-percent Christian minority.

"The government failed to protect Christians and their property effectively when they were attacked in Dahshour, Alexandria, and Rafah, and often failed to investigate and prosecute crimes against Christians and other religious minorities," the State Department said in its 2012 report on religious freedom in Egypt.

In June 2012, Mohammed Morsi, a member of the fundamentalist Muslim Brotherhood, won Egypt's presidency with 51.7 percent of the vote. He was not an evangelist for religious comity.

"On October 19, President Morsi said 'Amen' during televised prayers in Mansour after an imam stated, 'Oh Allah ... grant us victory over the infidels. Oh Allah, destroy the Jews and their supporters,'" the State Department reported. "This is a common prayer in Egyptian mosques and came in a litany of other prayers."

On July 3, 2013, the Egyptian military overthrew Morsi. But that did not heal Egypt.

"In 2013, violent sectarian attacks, targeting primarily Copts, occurred both during and after Morsi's tenure," said the 2014 report of the U.S. Commission on International Religious Freedom.

"For example," said the report, "in April 2013, police failed to prevent an attack on St. Mark's Cathedral during a funeral. The funeral was being held for five Copts who were killed, along with a Muslim, after sectarian attacks two days earlier. This was the first violent incident on the seat of the Coptic Orthodox Pope in centuries."

"Following President Morsi's ouster from office on July 3, there was a significant increase in violent attacks against Christians in July and August," said the report. "On August 14, the day the Egyptian security forces dispersed pro-Morsi protesters, violent religious extremists and thugs launched a coordinated series of attacks on Christians and their property throughout the country. At least seven Copts were killed and more than 200 churches and other Christian religious structures, homes and businesses attacked."

In the wake of Egypt's revolution and counter-revolution, popular opinion in the country, especially among the young, tilted in favor of the military and against the Muslim Brotherhood.

The survey asked people whether they favored or opposed the Egyptian military's removal of Morsi from power. Overall, 54 percent of Egyptians said they did. But this was not true among all age groups. While 56 percent of Egyptians under 50 approved his removal, Egyptians 50 or older opposed it 49 percent to 46 percent.

Fifty-six percent of Egyptians also said the military was having a good influence on the way things were going in the country, while only 38 percent had a favorable opinion of the Muslim Brotherhood.

Fifty-four percent said they had a favorable opinion of then-Defense Minister Abdul Fattah al-Sisi, who led the overthrow of Morsi.

Fifty-two percent of Egyptians said their country should rely on a democratic government, 43 percent on a strong leader.

Egyptians have not ended their quest for representative government. But they have learned a hard lesson: Just because a politician comes to power through the ballot box does not mean he will advance the cause of liberty.