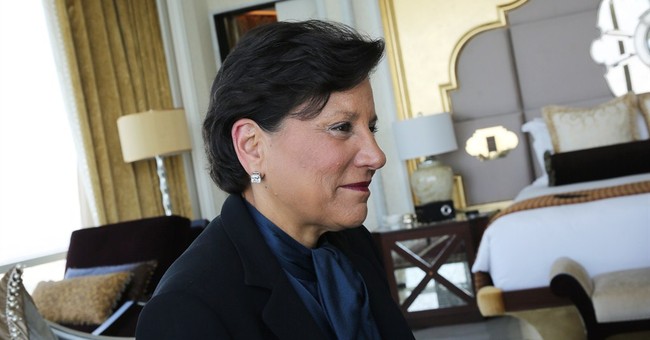 "Women are still the ones that are carrying the greatest burden when it comes to trying to balance family and work," President Obama said last week to a group of women who serve in the U.S. Congress.

With this in mind, he is now planning a "White House Summit on Working Families" to take place this summer.

Obama is no doubt preparing to cast stones at the private sector. He really ought to look at his own administration.

Since Obama has been in office, according to data from the Office of Personnel Management, the percentage of women in the civilian federal work force has been shrinking. Before Obama took office, it was already smaller than the percentage in the overall national civilian labor force. Under Obama, it has gotten smaller still.

OPM maintains a database called FedScope that maintains historical information going back to 1998 on much of the federal civilian labor force (but excludes, for example, the Judiciary, the White House, the Office of the Vice President, several intelligence agencies and the legislative staff of Congress). According to this database, about 44.4 percent of civilian federal workers were female in 1998.

In 2013, only about 43.5 percent were female -- the lowest percentage in the sixteen years available.

The female share of the federal government's civilian federal labor force peaked in 2000. That year there were 1,762,559 civilian federal workers covered by the OPM database. Men accounted for 969,255 or about 55 percent; women accounted for 793,288 or about 45 percent (and another 16 federal workers were classified as having an "unspecified" gender).

In fiscal 2007 and 2008, the two years before Obama took office, the female share of the federal civilian labor force was trending very slightly upward, rising from about 44.2 percent in 2006 to about 44.4 percent in 2008.

In fiscal 2009, the year Obama was inaugurated, the female share of the federal civilian workforce started trending slightly downward.

In a report released last year, "Common Characteristics of the Government 2012," OPM published a table listing the gender composition of a subset of the federal civilian labor force it calls "non-seasonal full-time permanent" employees. This group, according to OPM, "includes all employees working a 40-hour work week year round with no absolute end date."

That is 4.2 points lower than the approximately 46.9 percent female share of the national civilian labor force in 2012.

The OPM data also indicates that women have a larger share of lower-paying jobs in the federal workforce.

Perhaps our entire economy would work better, and American families would have an easier time paying their own way, if the entire federal government was downsized -- while treating all its remaining employees in an equitable and merit-based fashion.

That, however, is unlikely to be one of the options entertained by President Obama's summit on working families.