Priest Returns From China -- Has Mass Blocked by US Government 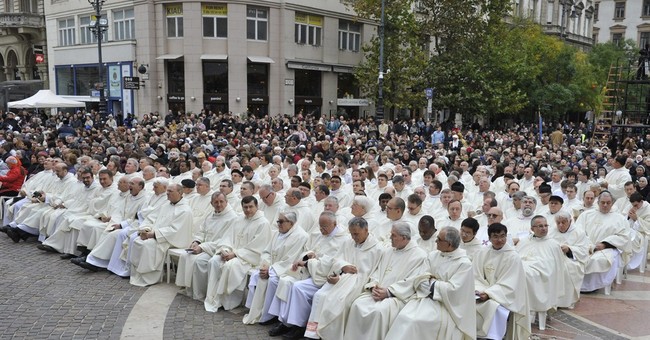 "I had to say Mass in my room," says Father Ray Leonard, recalling the years he served in the Tibetan region of the People's Republic of China.

In that country, where the Communist government has created a state-sanctioned facsimile of the Catholic Church and driven faithful Catholics underground, Father Leonard saw firsthand how totalitarians approach religion.

"Everything is controlled," he told me in an interview. "If you are part of the public church, what is known as the Patriotic Church, the church which is for the most part governed by the Communist Party, they restrict everything. They restrict the times that you are open. They restrict the messages that you can preach about. They prohibit certain individuals that they would not want in public ministries."

"The interference is widespread and constant," he said.

Father Leonard returned to the United State about a year ago and soon applied for a job as a civilian chaplain with the Department of Defense. He was hired and assigned to Naval Submarine Base Kings Bay in Georgia, which serves as homeport to six ballistic missile submarines, two guided missile submarines -- and 300 Catholic families.

His contract started Oct. 1, the same day as the partial government shutdown.

Shortly before that, however, Congress approved -- and President Barack Obama signed -- the Pay Our Military Act. It appropriated "such sums as are necessary to provide pay and allowances to contractors of the Department of Defense ... whom the Secretary concerned determines are providing support to members of the Armed Forces."

Father Leonard commenced his own duties providing support to the families at Kings Bay. "No one even said anything," he said. "I was there during the week and having the Mass."

Then, on Friday, he got the news. "There will be no services this weekend."

CNSNews.com managing editor Michael Chapman wrote a story about what was happening to civilian chaplains, citing an op-ed published by Archdiocese for the Military Services General Counsel John Schlageter, noting that if the shutdown continued through the weekend civilian priests could risk arrest if they tried to carry out their ministries on military bases.

On Saturday, Oct. 5, the House responded. It voted 400-to-1 for resolution stating it was the intention of Congress "that the Secretary of Defense permit military chaplains and other personnel, including contract personnel, hired to perform duties of a military chaplain to perform religious services and ministry, during any lapse in appropriations."

That same day, Secretary of Defense Chuck Hagel issued a memorandum explaining the administration's interpretation the Pay Our Military Act. Its key passage said: "Under our current reading of the law, the standard of 'support members of the Armed Forces' requires a focus on those employees whose responsibilities contribute to the morale, well-being, capabilities, and readiness of covered military members during the lapse of appropriations."

Did civilian Catholic chaplains contribute to morale and well-being? Not according to the Obama administration.

Further, because the administration decided civilian priests could not return to work under the terms of their contracts, those priests were barred by the Anti-Deficiency Act from even volunteering their services.

At some military bases around the world that meant Catholic service members had no one to administer the sacraments.

"Well, we do have a church within a 10-mile radius here," said Father Leonard. "But the problem is that a lot of our enlisted active people, they may be on duty on the weekend. They may only have one hour set aside where they can leave their work and come to Mass, and they would never be able to make the driving out into town and then coming back."

"There's other people that might be on a security job and they cannot leave the base," he said. "So, there are people telling me that they had to miss Mass. They didn't have any other option -- even here at Kings Bay."

On Monday, Oct. 7, Father Leonard learned he was prohibited from engaging in any priestly activities on the base. He could not even go to his office.

On Thursday, Oct. 10, the Senate unanimously passed a resolution to address the matter. Echoing the language of Defense Secretary Hagel's memorandum, it said Congress "finds that the provision and availability of religious services and clergy is important to the morale and well-being of many members of the Armed Forces and their families" and thus "hoped" Hagel would find that contract clergy "would therefore be covered under the appropriations made available under the Pay Our Military Act."

Hagel and the administration paid no attention to the congressional resolutions. Into the next week, they continued to prohibit civilian priests from administering the sacraments on military bases.

"We were not brought back," said Father Leonard. It was a move he describes as "an open slap in the face to Catholics."

"People like family counselors, and even people who were working in the gym, were brought back before I was," he said.

In China, says Father Leonard, "We expected the Communist Party to interfere and block religious services. They were very clear that they despised religion and they would do that. There was no question. But the great surprise is to be here and be standing in front of my chapel where I am the pastor and told that you can't have services here by decree of the government."

Represented by the Thomas More Law Center, this heroic priest is now suing the U.S. Department of Defense for violating the First Amendment right to the free exercise of religion. He says he will take the case all the way to the Supreme Court if he must.