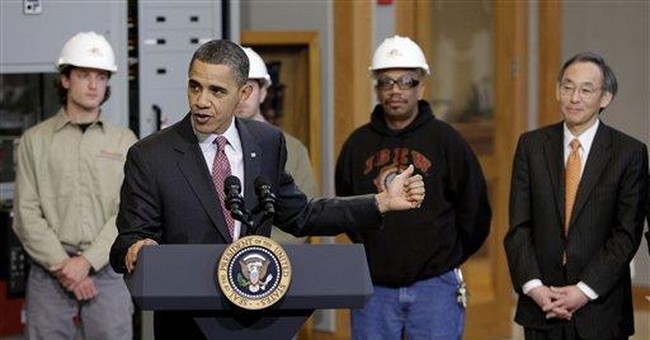 After he signed a law last week authorizing the U.S. Treasury to borrow an additional $1.9 trillion, President Barack Obama delivered a characteristically sanctimonious speech. It was about his deep commitment to frugality.

"After a decade of profligacy, the American people are tired of politicians who talk the talk but don't walk the walk when it comes to fiscal responsibility," he said. "It's easy to get up in front of the cameras and rant against exploding deficits. What's hard is actually getting deficits under control. But that's what we must do. Like families across the country, we have to take responsibility for every dollar we spend."

To put Obama's Olympian hypocrisy in perspective, one need only examine the federal budget tables posted on the White House website by Obama's own Office of Management and Budget.

Obama will outspend and out-borrow the admittedly profligate George W. Bush, a man Obama and his lieutenants routinely malign for fiscal recklessness and who, when in office, was often hailed even by his allies as a Big Government Republican. Obama will even outspend -- but not quite out-borrow -- his fellow welfare-state liberal FDR, who had to contend with both the Depression and World War II.

FDR was inaugurated in March 1933 and died in April 1945. He is thus responsible for the 12 fiscal years from 1934 to 1945. During those years of depression and world war, according to OMB, federal spending averaged 19.35 percent of GDP. During Obama's four fiscal years, OMB estimates spending will average 24.13 percent of GDP. That is about 25 percent more than under FDR.

In fiscal 1942, when the U.S. started dramatically ramping up expenditures to fight World War II, federal spending equaled 24.3 percent of GDP. In 2010, the first full fiscal year of the Obama era, spending will reach 25.4 percent of GDP.

And Obama and FDR share one historic debt-accumulating distinction. By OMB's calculation, they are the only two presidents since 1930 to run up annual deficits that reached double figures as a percentage of GDP. Obama will run up a deficit this year of 10.6 percent of GDP. The last time the deficit hit double digits as a percentage of GDP was 1945 -- when Germany and Japan surrendered.

The U.S. won the Cold War without ever running a double-digit deficit. President Reagan's highest deficit was 6 percent of GDP in 1983 -- and he bankrupted the Soviet Union not the United States.

The bottomline on Obama: He puts our money where his mouth is.