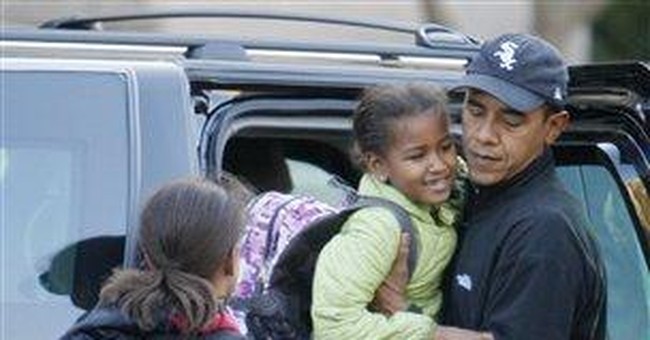 Barack and Michelle Obama are poised to commit a classic act of limousine-liberal hypocrisy -- in this case, turning their backs on tens of thousands of inner-city kids in Washington, D.C.

Public schools, it seems, are good enough for poor and middle-class families, but not for rich families like the Obamas.

In July, when he addressed the NAACP's annual convention, Sen. Barack Obama expressed his devotion to American public schools, vowing he would not "walk away from them" by supporting school-choice programs like Sen. John McCain did.

"What he's offering amounts to little more than the same tired rhetoric about vouchers," said Obama. "Well, I believe we need to move beyond the same debate we've been having for the past 30 years when we haven't gotten anything done. We need to fix and improve our public schools, not throw our hands up and walk away from them."

In October, in the last presidential debate, Obama specifically attacked McCain's support for the school-choice program in Washington, D.C., which gives 1,900 lower-income students a voucher worth up to $7,500 to attend the private school of their choice -- and which McCain wanted to expand to include more students.

"The centerpiece of Sen. McCain's education policy is to increase the voucher program in D.C. by 2,000 slots," Obama said derisively. "That leaves all of you who live in the other 50 states without an education reform policy from Sen. McCain. So if we are going to be serious about this issue, we've got to have a president who is going to tackle it head-on, and that's what I intend to do as president."

In case anyone doubted that he still opposed school-voucher programs, Obama made his position clear in Time magazine just before the election. The magazine asked: "Should parents be given vouchers to enable them to send their children to any school?" Obama answered: "No: I believe that public education in America should foster innovation and provide students with varied, high-quality learning opportunities."

The practical effect of Obama's policy in Washington, D.C., is that tens of thousands of students will remain trapped in what are simultaneously the most expensive and worst public schools in America.

According to "Revenues and Expenditures for Public Elementary and Secondary Schools: School Year 2005-2006," a report published by the Department of Education in July, total expenditures per pupil in the District of Columbia's public schools was $15,798, more than the per pupil spending of any state.

Yet, in the National Assessment of Education Progress mathematics and reading tests administered to fourth- and eighth-graders in 2007, D.C. students did worse than students in any state.

Only 12 percent of D.C. eighth-graders were rated grade-level "proficient" or better in reading, only 8 percent in math.

There were 59,616 students enrolled in the D.C. public schools in 2006, according to the National Center for Education Statistics. If McCain's plan to increase by 2,000 the number of vouchers available in the District were enacted, taxpayers would still be spending $15,798 per student per year to send more than 55,000 kids through a school system where about nine out of 10 students do not learn to read or do math at grade-level proficiency by the time they "graduate" from elementary school.

What is Obama's plan to deal with this? Spend $18 billion more in federal tax dollars on public education (as he promised in his campaign) -- and send his own kids to extremely expensive private schools. Currently, Obama's two daughters (ages 7 and 10) attend the University of Chicago Lab School, where tuition is $18,492 for grades 1-4 and $20,286 for grades 5-8.

When Michelle Obama visited Washington this week, she toured only two prospective schools for her daughters: Sidwell Friends, where lower-school tuition is $28,442; and Georgetown Day, where tuition is $27,445 for grades 1-5.

If Barack Obama backed legislation giving all students in D.C. a voucher worth the $15,798 D.C. public schools spend per pupil, poor and middle-class families -- especially those with more than two children -- would still not be able to afford Sidwell Friends and Georgetown Day. But they would be able to afford most of the other private schools in the Washington area, including almost all of the Catholic schools.

But that would contradict Obama's vision of America, a place where poor children remain trapped in public schools, rich children go to very expensive schools, and middle-class parents who work hard and struggle to send their children to religious schools that share their values and commitment to excellence must expect to pay not only for their own children's education but also escalating local and federal taxes to ill-educate their neighbor's children.

Put your children where your ideology is, Mr. President-elect. Send them to public school.