A Party Against Pioneers 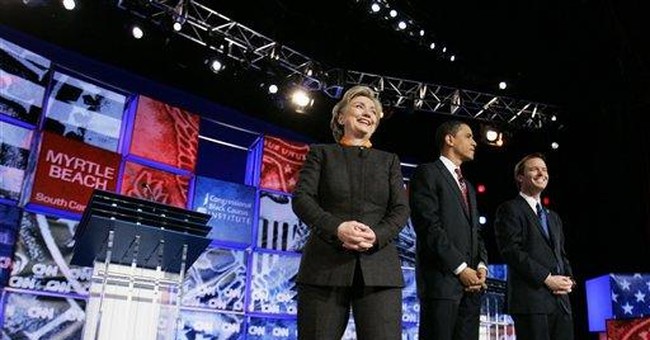 It can now be said with confidence that founding father John Adams would never vote for a Hillary Clinton, Barack Obama or John Edwards.

As witnessed by their South Carolina debate, each of these Democrats would annihilate the pioneering spirit Adams so prized in the American people.

When the British Parliament passed the Stamp Act in 1765 -- demanding that American colonists not represented in Parliament pay a tax on playing cards, dice and various documents -- Adams was infuriated at its infringement on the already well-established tradition Americans had of deciding things for ourselves.

He counseled his countrymen to remember they were descendants of pioneers.

"Be it remembered, however, that liberty must at all hazards be supported. We have a right to it, derived from our Maker. But if we had not, our fathers have earned it and bought it for us, at the expense of their ease, their estates, their pleasure and their blood," wrote Adams. "Recollect their amazing fortitude, their bitter sufferings -- the hunger, the nakedness, the cold, which they patiently endured -- the severe labors of clearing their grounds, building their houses, raising their provisions, amidst dangers from wild beasts and savage men, before they had time or money or materials for commerce. Recollect the civil and religious principles and hopes and expectations which constantly supported and carried them through all hardships with patience and resignation. Let us recollect it was liberty for themselves and us and ours, which conquered all discouragements, dangers and trials."

After Americans won their independence, it was this same pioneering tenacity that allowed them to settle and develop a vast continent.

The families that created this country built their own homes, cleared their own fields, grew their own food, took care of their own health and educated their own children. They depended on themselves and perhaps their neighbors. They did not depend on the government in Washington, D.C.

In exchange for the risks they took in striking into the wilderness, they found boundless freedom and the potential to create wealth for themselves and their children. There were no guarantees, just beckoning opportunities.

When the continent was settled, Americans saw other frontiers to conquer: The same spirit that drove them West drove them to be innovators and entrepreneurs in industries that already existed and in new ones they imagined and brought into being.

In their South Carolina debate, Clinton, Obama and Edwards offered the antithesis of the pioneers' vision. They competed in offering voters opportunities to become dependent on government.

Clinton opened the bidding, offering to help people pay for their homes and heating costs. "I have a package of $110 billion," she said. "$70 billion of that would go toward dealing with the home mortgage crisis. ... Then, I think we need to give people about $650, if they qualify -- which will be millions of people -- to help pay for their energy bill this winter."

Edwards agreed that there should be "a home rescue fund." Obama upped the ante, offering to give retired people "a supplement to their Social Security check."

Hillary trumped him. "That's why I have $5 billion to do it," she said. "We could put hundreds and hundreds of young people to work right now, putting solar panels in, insulating homes."

Edwards offered an additional plan to "help low-income families save." "(W)e need to match what they're able to save," he said, "so they actually have something that they can fall back on in case they get in a place where they need more money."

Finally, they argued over whose "universal health care plan" was more universal. Obama deviated from the party line, admitting his plan would only guarantee coverage to those who actually "want" it. Clinton said: "I am adamantly in favor of universal health care, and that means everybody is covered. And we will have a system to make it affordable, but it will be required ... ."

Edwards won the competition, however. Asked if illegal aliens would be covered by his plan, he said no -- because he would make them American citizens first. "(W)hen people who are living here undocumented actually have a chance to become American citizens, then I think they've got the opportunity to become part of the plan," he said.

What could be farther removed from the America that John Adams imagined, where descendants of pioneers lived free from undue government interference, than the place John Edwards foresees, where immigrants come here illegally on a road paved by tax dollars that runs straight into a government-run health care program?