Trick or Treat? The Common Core Is Knocking at Your Door 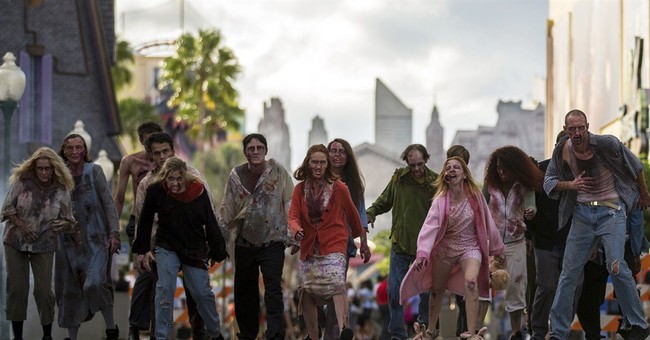 The Common Core Standards that now dictate the so-called “standards” and therefore the testing and therefore the curriculum (despite claims to the contrary) of forty-five state school systems in the land have dressed themselves up nicely. They have donned this season’s popular costume of “college and career readiness” in a “twenty-first-century global economy.” It seems to be the only one anyone in either public office or the public schools is wearing this year since the liberal arts have been out of fashion for some time.

In the spirit of Halloween, let’s see how well the twenty-first-century Common Core class would handle an actual book: say, Frankenstein by Mary Shelley, one of the most memorable philosophical novels in British literature. In the Pearson/Prentice Hall literature textbook called The British Tradition, seventeen pages are ostensibly dedicated to Frankenstein. Two of those are taken up by modern author Elizabeth McCracken telling students about the scary movies she watched as a child, including Frankenstein, Bride of Frankenstein, and Abbott and Costello Meet Frankenstein as well as dreams she had. Under the heading “Critical Reading,” students are asked what movies McCracken watched as a child. Another page features a hokey picture of a Frankenstein monster circa 1955.

In the margins of the Teacher’s Edition to the textbook, teachers are encouraged to ask their students what “classic” stories of urban myths, tales of alien abductions, or ghost stories they have heard. Examples include stories of alligators in sewers, a man abducted for his kidneys, and aliens landing in Roswell, New Mexico. Students are asked to write a paragraph on “one of these modern urban myths.” The learning continues when students are challenged to write “a brief autobiography of a monster.” The editors lament that most monster stories are told from the perspective of “the humans confronting the monster.” They want to turn the tables by having students consider “what monsters think about their treatment.” Those poor, misunderstood monsters!

Three pages out of the seventeen feature Mary Shelley’s actual words on them. But they are not selections from the novel or any kind of preparation for reading the novel. Rather, they are taken from an introduction Shelley wrote about writing the novel. The only indication that students are encouraged to read Frankenstein is a box in the margin of the Teacher’s Edition indicating that the “advanced readers” who are “interested” might read a “segment” of the novel in order to compare the monster to Shelley’s description in her introduction. The “gifted and talented students” are further asked to “illustrate one aspect of Shelley’s imaginings that is especially Gothic in its mood” and “display their Gothic art to the rest of the class.” It is not clear what the non-gifted and untalented students will be doing while the “TAG” kids are working on their art project.

If students in English class are not reading Frankenstein, then what are they reading that might qualify as fiction or, er, literature? That’s where the textbook takes us “live from New York . . . it’s Saturday Night!” Yes, under the heading “Contemporary Connection,” this literature book apportions five pages (two more than are given to Mary Shelley) to a script of a Saturday Night Live parody of Frankenstein. First, students are invited “to share their impressions of the long-running comedy show.” (In our day, did we have to be told by our English teachers to watch SNL?) Again the talented-and-gifted students are called to the fore, as they are supposed to obtain props, costumes, and make-up that will enable them to “take roles and do a dramatic reading” of the script. Let us look at a specimen of that timeless scene:

Head Villager: [shakes his head] I’m not the monster! [points to Frankenstein’s monster] Look at ’im! He’s got a square head and green skin!

Frankenstein’s Monster: Oh, great—now it’s a racial thing! You know what? You guys are a bunch of fascists! [villager with a lit torch again steps too close] Seriously, du-ude! Get that fire away from me! . . .

Lest the teacher not know how to explain the term fascist, the Teacher’s Edition lends a hand:

Point out the use of the term fascist. Explain its traditional political meaning and how it has been extended to refer to any right-wing extremist group.

Mmm . . . “Any right-wing extremist group”: might that term extend to the Tea Party?

Under the guise of “critical thinking” and “critical reading” and “critical viewing,” teachers using this Common Core textbook are encouraged to have students talk about monsters, share their dreams about monsters, write an autobiography of a monster, dress up as monsters, talk about Saturday Night Live, and act out a Saturday Night Live script. None of this involves reading the philosophical novel called Frankenstein. In what grade would all this “critical thinking” take place? The senior year of high school. The second semester of the senior year. As a real (not a dress-up) college professor, I ask, how in the world will such nonsense make this nation’s students more college or career ready? Has the nation been tricked or treated by adopting the Common Core?