Teresa Mull
|
Posted: May 05, 2017 9:37 AM
Share   Tweet
The opinions expressed by columnists are their own and do not necessarily represent the views of Townhall.com. 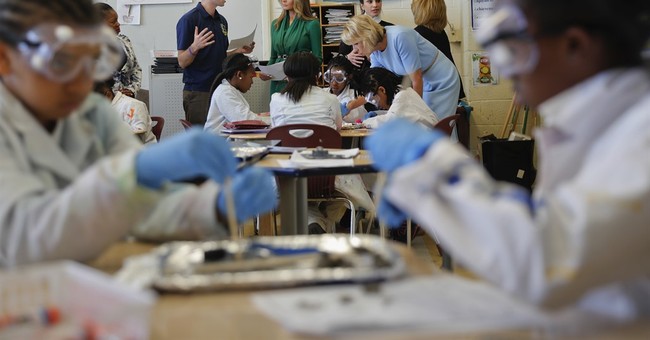 It’s National Charter Schools Week, and parents, students, teachers, and community members across the nation are celebrating the success of their independent schools.

Charters are technically public schools, since they’re publicly funded, tuition-free, and open to all students, but they’re privately managed and held to higher accountability standards than traditional public schools in exchange for increased flexibility in other areas.

Charters, just like any institution contaminated by governmental mandates and bungled by burdensome bureaucracy, are far from ideal. But they do offer at least some alternatives to the failing, traditional public school system that segregates children into schools based on an arbitrary ZIP code. Charters also serve as a beacon, shedding light on the truth that even the slightest separation from government oversight yields momentous results.

“The largest national study of charter school performance was conducted by the Center for Research on Education Outcomes (CREDO) at Stanford University in 2013,” the National Association for Public Charter Schools (NAPCS) reports. “Researchers found that overall, students in charter schools are outperforming their district-run school peers in reading, adding an average seven days of learning per year, and performing as well as students in district-run public schools in math. … In both studies, results were more pronounced for minority students from low-income backgrounds, and the results increased the longer a student was enrolled in a charter school.

“Children who attend charter schools are more likely to graduate from high school than their traditional school peers,” NAPCS further reports. “And dozens of charter schools across the country have 100 percent college acceptance rates for their graduating seniors.”

Following the citywide destruction wreaked by Hurricane Katrina, New Orleans’ entire public school system has been taken over by charters—and to great success. In Boston, 33,000 students are on waitlists with the hope of gaining access to a charter, though voters there recently rejected a ballot initiative that would have lifted the cap on the number of charters allowed to operate in the city.

Charters, freer to innovate and forced to compete, have proven their value over and over again, yet they continue to agitate adversaries, mainly teachers unions and their cronies, including the NAACP. They dismiss any form of competition as downright evil.

Angel Figueroa, chief executive officer of the I-LEAD Charter School, a “risk charter school” in Reading, Pennsylvania, told me recently I-LEAD’s accreditation status is being unfairly challenged by the local school district, despite a truancy rate of 11 percent, compared to 64 percent in the Reading School District.

Members of a group working to get the Chicago Classical Academy started also told me recently their efforts to offer a classical alternative to students in Chicago—a city where education options are limited—have been “daunting, long, and difficult.” They say this is largely because of a deal the Chicago Public School district made with the Chicago Teachers Union that limits the number of students able to be enrolled in Chicago charters.

A recent New York Times article asked, “Who Needs Charters When You Have Public Schools Like These?” It offers advice as sensible as saying, “Ford F-150s are reliable, practical, and aesthetically pleasing, so let’s not manufacture any other model of car.” The author then wondered, after a fawning account of a day spent at an Oklahoma public school, whether “[U.S. Education Secretary Betsy] DeVos and her education department [will] appreciate the value of investing in high-quality public education and spread the word about school systems like Union? Or will the choice-and-vouchers ideology upstage the evidence?”

Our country thrives on choices, and to deny families the right to choose how and where their children are educated is un-American. Charters and any other form of education choice will always attract the objections of self-interested government devotees who challenge choice at every turn. It’s important to remember this week, National Charter Schools Week, that any separation from big government is better than none at all, and the proof is in the student results the public school sycophants choose to ignore or deny.