Surge in Disability Claims Is Gold Mine for Law Firms 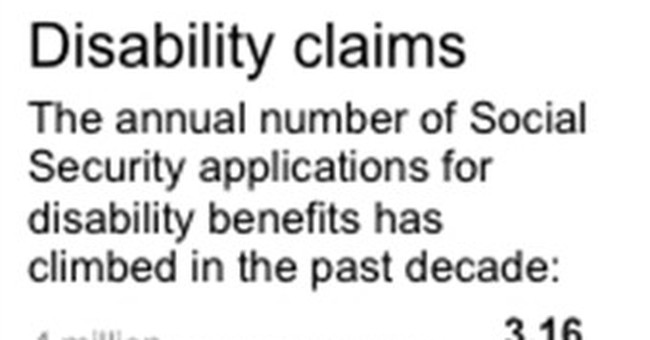 Hoosiers watching television during the day might have noticed the numerous commercials from law firms advertising their ability to help clients obtain government disability benefits. That’s because the process for seeking disability benefits has become a boon to legal firms that specialize in disability claims.

The federal government’s two main disability programs have experienced rising enrollment and soaring spending in recent years. Combined outlays on Social Security Disability Insurance and Supplemental Security Income have roughly doubled over the last decade and will cost taxpayers almost $200 billion this year. The complex and often subjective disability determination process, which is essentially the same for both programs, has created an opportunity for specialty law firms to grab a piece of the action.

The process can be very cumbersome and costly. A rejected disability applicant can first ask the Social Security Administration for a “reconsideration” of his or her claim. If rejected again, the applicant can request a hearing before an administrative law judge. These hearings do not include a government representative to question the claim on behalf of taxpayers. Meanwhile, the vast majority of applicants who appeal a denial of benefits to an administrative judge have legal representation. For some impairments — back disorders, for example — representation can exceed 90 percent.

An applicant whose appeal is successful is awarded payments dating back to the onset of the disability. The lawyer typically receives 25 percent or up to $6,000 of this “back pay.” While that amount may not be enticing to general law firms, firms specializing in disability claims can make millions of dollars based on a high volume of cases and knowing how to work the system. According to Social Security Administration data obtained by the Wall Street Journal, fees paid to lawyers and other representatives of disability applicants went from $425 million in 2001 to $1.4 billion in 2011.

Reining in federal disability programs would not only save taxpayer money, it would also give marginally disabled people who have valuable skills an incentive to reenter the workforce.

While the majority of applicants for disability benefits are denied (often for technical reasons), the opposite is the case for those who appeal to their claim to administrative judges. Judges are largely independent and possess broad discretion to award or deny benefits. Legal firms are aware of which judges are more likely to award benefits and try to steer their clients accordingly. For example, one judge approved 97 percent of his cases that involved back disorders, while another judge allowed only 15 percent of his cases with that health problem.

Compounding matters is a massive backlog for disability claims at the hearings level. Claims awaiting a hearing before one of 1,400 administrative law judges grew from 12,000 cases in 1999 to 817,000 cases in 2012. The Social Security Administration has effectively instituted quotas on judges to reduce the backlog. However, the Association of Administrative Law Judges says that because of the quotas, “many administrative law judges are pressured to grant more claims than they otherwise would, as it simply is faster and easier to grant claims than to deny them.”

The sad reality is that the federal government’s disability system is broken. Originally, the idea was that people would be eligible for disability benefits only if they could not work at all, but today the standards for ability to work are much looser. For example, after Congress relaxed eligibility standards in 1984, awards based on “nonexertional restrictions” — a mental condition such as depression or physical pain stemming from a musculoskeletal condition — jumped 323 percent in the subsequent 20 years. As a result, moderately disabled people capable of performing work, or at least taking steps in that direction, are opting instead for a check from the government.

Federal disability programs are in dire need of reform. Reining them in would not only save taxpayer money, it would also give marginally disabled people who have valuable skills an incentive to reenter the workforce. Unfortunately, once people go on the disability rolls they rarely leave — even if their health improves. With the U.S. workforce shrinking because of the retirement of baby boomers, the economy cannot afford such policies.