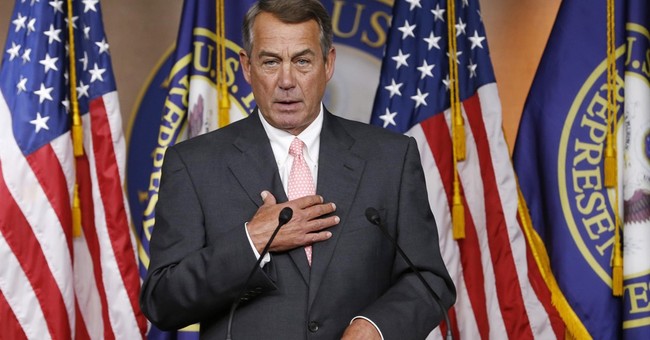 Trending
What a week for visuals, the holy grail of marketing men, though there was nothing particularly holy about the way politics pursued religious pomp in the slipperiest city.

Pope Francis rode through the streets cleared of traffic in his humble little Fiat, which looked like a toy between the enormous black limousines and monstrous SUVs of his security detail. The pontiff, in an elegant white robe and cape, was the center of all attention whether on his way to a cathedral to say a mass or to a soup kitchen to serve the homeless. We all became wide-eyed spectators to the passing paradox of wealth and humility.

John Boehner was reduced to a blubbering mass of (obviously heartfelt) emotion before our eyes as he listened from the speaker's perch to the pontiff speak to his House divided, appealing for unity, striving to capture a brief moment of uplift, rare in these fractured times. Then Mr. Boehner trumped the public enthusiasm for Roman spectacle -- in Washington, anyway -- with his resignation from office, accompanied by biblical allusions of his own.

He called certain members of his party "false prophets" who "whip people into a frenzy" to make legislative demands that "are never going to happen." On "Face the Nation," he stressed the need for patience with the democratic system, furnished by the Founding Fathers as the "long, slow process" for bringing about change.

But this is not a time that appreciates long and slow. Ours is an edgy, racing age, where people cultivate short attention spans and are always multitasking and in a hurry to change the channel, read email or text something to somebody. Cable TV, talk radio and the swift messaging on social media push polarities with news recycled before anyone can be bored by thoughtful insight.

Through the hype, the anger, the repetition, the tedious sound bites carefully sliced, diced and dispatched to different segments of voters, we're nevertheless actually learning something. The candidates compete for allegiance, working like sculptors, making chips fly as they polish the image they finally put before us.

Will we be pleased with what's finally standing there in a mist of chip dust? It's way too early to say. It's easy to be negative about the process, but it seems to work. It holds attention and keeps everyone from the dreaded clutch of boredom. With the tedium of 24/7 television, the addiction of the Internet, the cell phone growing out of nearly everyone's head, the blinking lights and syncopated ringtones, there's titillation, scintillation and an endless search for what the young call the "sweet spot of seduction." This is the latest challenge in the political process. The candidate who finds the sweet spot moves to the head of the class.

There are lots of things to criticize about Donald Trump, but being boring isn't one of them. He keeps our attention on him. We listen to his outlandish insults and watch his pursed lips pucker to deliver a contemptuous remark about whoever flits across his radar. He gets the adrenaline pumping. In the long run, his snarky remarks may sate the public's curiosity, but as Winston Churchill reminded, in the long run there is no long run. For now he can be the foil for someone who can speak with substance, in clear, calm sentences.

Carly Fiorina managed to set herself apart when she stepped into the midst of a protest over Planned Parenthood, walking over to talk to one of the protesters rather than walk past her. It was a fearless moment. A face-to-face conversation humanizes the political imagery, and softens the Us-vs.-Them mentality.

Hillary Clinton has been hurt most by the campaign process, hoist on the petard of her email controversy and her curse of conspiratorial exaggeration. She called for transparency in government in a television clip, and in the discussion that followed on "Meet the Press," she tried to hide behind the notion of "technical experts." "I relied on people who were (experts)," she said. Might she have to explain anything in the deleted emails she finally turned over to the FBI? "My attorneys conducted this exhaustive process, I did not participate." (Did someone say "transparency in government?")

With a full year to go, the search for that sweet spot that so captivates the marketing men looks endless. It's hard to find.