Ignorance in the Common Core 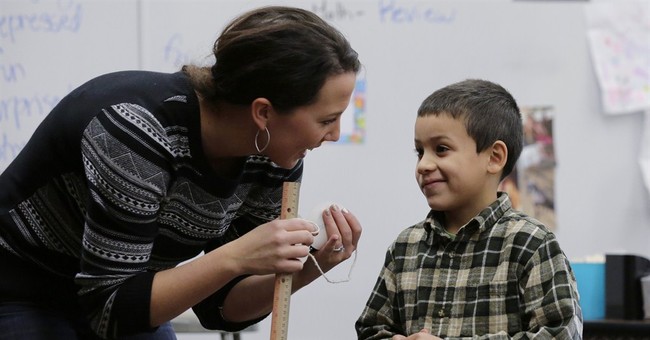 Trending
Another Presidents Day, like the presidents it was meant to honor, has come and gone and nobody remembers what it was all about, beyond another three-day weekend for federal employees and a little hype to sell automobiles and snake oil. Presidents Day replaces holidays to mark the birthdays of Washington and Lincoln, and now, presumably, the catchall honor is extended to William Henry Harrison, Chester Alan Arthur and Millard Fillmore as well.

When we observed George Washington's actual birthday (Feb. 22), schoolchildren talked about him as the "Father of Our Country." We traded stories, some of them myths, like Parson Weems' tale about how young George cut down his father's favorite cherry tree and refused to lie when his father confronted him. Washington was actually important, the general who won the Revolution and presided over the fractious Constitutional Convention in Philadelphia, which in 1787 produced the document, now much abused, that was the blueprint to enlist many different voices to create "a more perfect union" (though not a perfect one).

Abandoning a holiday with the first president's name indelibly on it is symbolic of the diminished recognition of his stature. Schoolchildren who aren't taught why they celebrate his birthday are deprived of the knowledge of his influence on how the government works. From acorns of ignorance grow great oaks of civic loss.

In a national survey of almost 1,500 adults, almost two-thirds of the respondents couldn't identify the three branches of government; a third couldn't even name one. The survey, conducted by the Annenberg Public Policy Center, further found that only 1 in 4 Americans know why and how Congress overrides a president's veto. Perhaps less surprising is that twice as many respondents could name a judge on the television show "American Idol" than could identify John Roberts as Chief Justice.

While pop culture will nearly always trump politics in the public eye, when the country is sharply divided politically, like now, understanding how the three branches of government work is crucial. Simply "staying up to date" with Twitter, Facebook and YouTube isn't good enough.

"For the American experiment in self-government to endure, America's founding principles must be taught anew to each generation of citizens," says Roger Beckett, executive director of the Ashbrook Center at Ashland University, which teaches civics for students and teachers through the study of original documents. The center has just published a lively edition of the "Debates in the Federal Convention of 1787 by James Madison, a Member," which renders a strong sense of 18th-century controversies that remain relevant today. The debates reveal both the difficulty and necessity of hard compromise.

"When, where and why do you compromise what you believe?" asks the historian Gordon Lloyd, who edited Madison's notes of the convention debates. "To what extent do you let yourself be persuaded by the deliberation that takes place, rather than continuing to represent the wishes of the people who sent you?" Tough questions, and good ones.

Controversy over what young people should learn continues to excite argument as reformers and politicians push and pull against Common Core standards for public school education, but the emphasis has yet to focus on how the substantive failure to teach civics hurts public engagement and understanding of political issues. A half-century ago, "social studies" began to replace civics, eliminating patriotism as a civic virtue, focusing on flaws rather than what made America the exceptional nation.

When Sandra Day O'Connor was a justice on the Supreme Court, she thought that much of the criticism of the court was rooted in a "fundamental misunderstanding of the role of the judicial branch of government." When she retired in 2006, she founded "iCivics," a web based project that produced video games such as "Do I Have a Right?" which requires players acting as attorneys to figure out whether their clients have specific rights guaranteed by the Constitution. Other games simulate Supreme Court arguments. These games are not popular, like "Grand Theft Auto" or "Call of Duty," but they should be.

Arizona recently became the first state to require high school students to pass the U.S. citizenship test on civics to qualify for a diploma, and other states are considering it. That's a small start.

George Washington despaired that the Constitutional Convention delegates in Philadelphia would ever complete their work. The first president understood, as Gordon Lloyd observes that, "the delegates had to go through all the hazards of negotiation until they reached a breakthrough." There's a moral here for all those congressmen who skipped town this week to look for a Presidents Day bargain.