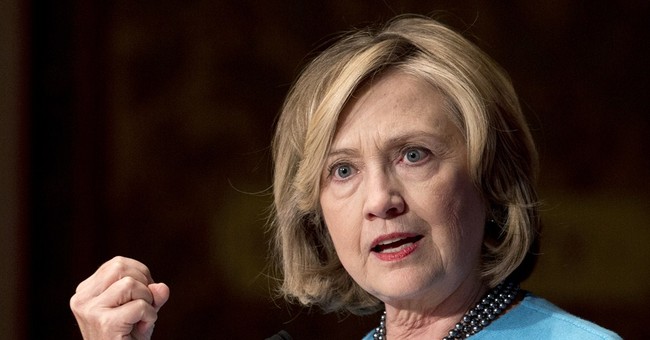 Back in the day when Betty Friedan and Gloria Steinem were in high school, and a new girl walked into the classroom, the boys looked to see whether she was a pretty one, and the girls looked to see what she had to offer to their cliques. The boys evaluated looks -- the girls personality.

Since the ascendancy of feminism, the "gender split" is blurred in both high school and the life that follows. Looks and personality are measured on a different scale. No longer does a guy make fun of a girl with brains because sexist perceptions are no longer fashionable. (Men will always think a pretty girl is like a melody, however, and good for them.)

The changes have transformed politics. When Hillary arrived on the political landscape, she was essentially a "pre-feminist" woman, getting along with the girls and winning their support, but pre-feminist enough to depend on her man to smooth a path to power. She endured the feminist jokes and climbed over old boundaries. Her image as a first lady prevailed over policy. But when her health care scheme collapsed, the derisive question echoed across Capitol Hill: "Who elected her?" She learned a hard and expensive lesson.

By the time she left the White House, the political culture had changed and supported, at least by more than it had, a woman seeking power. She embarked on a "listening tour" to see whether New York voters wanted her to run for the Senate, and she was elected with feminine wiles and feminist determination, passive enough to smile and listen, smart enough to know when to speak up. By the time pants had become female fashion, she wore them as "one of the boys." More important, she became her own person.

So close did Hillary come to defeating Barack Obama for the nomination in '08 that he first wanted her out of town. So ambitious was she to be a power figure larger than simply a senator, one of 100, that she accepted the job of Secretary of State and stayed in town as the president's mouthpiece abroad.

Hillary initially sought power through a powerful husband; she had a realistic grasp of how far a woman could go in politics and waited to ride out of Bill's enormous shadow on the crest of second-wave feminism. The "glass ceiling" was once a formidable obstacle for her, and she still sometimes uses it as convenient metaphor. But that's not her problem now. The new girl in the classroom is.

Elizabeth Warren doesn't come with the '"sexist" baggage that Hillary carried into the limelight. No man ever carried her over the threshold to power. When she arrived in Washington, feminist politics had pushed on to a new stage of acceptance; it was OK for a woman to be as wonky as Washington men.

The Democratic class of '16 won't now choose between Hillary Clinton or Elizabeth Warren based on gender (or sex as it used to be called). Their divisive lines are ideological. They represent different perspectives on what's wrong with the country. If both women see themselves as intellectual heavyweights, they weigh in on different scales.

As the Democratic Party moves ever more leftward, Warren taps into passionate differences between them. When Barack Obama ran against Hillary, he said he was about hope and change, and no matter how Hillary tried to be the first woman president, "herstory" was trumped by the first black to be president.

There's a completely different story lurking in a matchup with Elizabeth Warren. Hillary runs far behind as the populist to curb the power of the wealthiest in America, as the threat to Wall Street excess, issues with increasing Democratic appeal. While an earlier Hillary could have stretched out in a populist campaign, the Hillary with a Wal-Mart past (she once sat on the board) and a fabulously wealthy foundation would be loathe to alienate the big bucks she needs to run.

The long-standing knock on the Clintons is that "they primarily represent themselves," as Noam Scheiber, writes in The New Republic after long talks with Democratic moneybags. Elizabeth Warren's "core convictions" shade the Clinton focus groups.

In a digital media world impatient for a fresh voice and galvanizing inspiration, Clinton photo shoots are as dated as the rotogravure. Elizabeth Warren has a determined economic agenda to expand government regulation. The odds are long against a Warren nomination, but she can fire up a fierce debate about who the Democrats are and what they want to be. That ought to give a few good men in the Republican ranks the opening to get their small-government message packaged for prime time. The Hillary-Warren collision is a potent opportunity.