Gone Is the Girl Who Can't Say 'No' 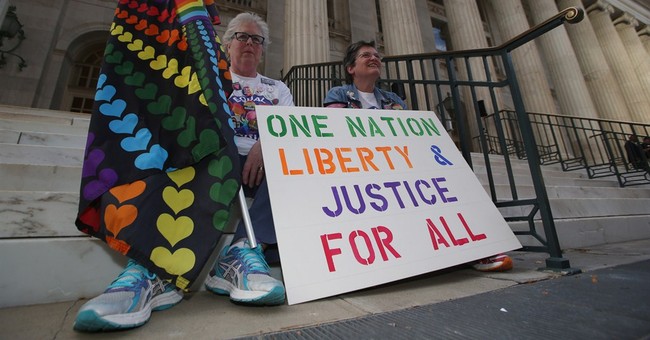 Gay blades, weary of the indulgent life of easy gratification, want the courts to guarantee their right to marry. Stuffy straights demand that politicians legislate their partner's sexual intentions. The times, they are indeed a-changin'.

The Supreme Court delays making gay marriage legal in every state, and its passive-aggressive approach enables a man to marry a man, and a woman to marry a woman in 30 states, and rising. Gays have succeeded in getting the state out of their bedrooms and into the maze of matrimony.

Liaisons between men and women are more complicated. In California, which in the past has introduced the future, straights are inviting the state to guarantee safety in the bedroom. What began as a movement to reduce rape on campus has become a campaign to restrain the passion of the warm-blooded young. Sexual liberation becomes sexual limitation.

Gov. Jerry Brown of California has signed a law to require colleges that receive state money for student financial aid to enforce a standard called "affirmative consent," also known as "yes means yes." It might be called "affirmative inaction," since it stifles spontaneous sexuality in favor of explicit and continual consent, ranging from touching to trembling. Nonverbal cues are acceptable for those who prefer dramatic gesturing, but "an affirmative, unambiguous and conscious decision by each participant to engage in mutually agreed-upon sexuality" is required. This is an improvement over the original legislation that required "participants" to pause at each incremental step and seek verbal approval, but the law still requires consent "ongoing throughout a sexual activity." Getting past first base will be harder than ever, and no stolen bases.

The California law is meant to be the standard for complaints of sexual assault, but exactly how proof will be gathered opens up Pandora's box of possibilities. The law will inevitably influence behavior in unpredictable ways. There's a minefield of miscues between the first caress to pausing for birth control, and the law gives a new definition to "popping the question."

When Antioch College wrote a similar code of prescribed questions more than 20 years ago, "Saturday Night Live" satirized it with a game show called "Is it Date Rape?" Contestants were asked: "May I compliment you on your halter top? May I kiss you on the mouth? May I elevate the level of sexual intimacy by feeling your buttocks?" (How would Cary Grant do it?)

Grandma Grundy, with her rules of prudish behavior, was a figure of fun, mocked by everyone who thought she should mind her own business. Now her business is supervising private matters of intimacy.

Obviously, the legislation reflects a cry for help from young college women who feel overwhelmed by the runaway vulgarity of the culture. Colleges once acted (SET ITAL) in loco parentis, (END ITAL) or "in the place of the parent." That disappeared with the curfews, dress codes and panty raids of the 1950s. Politicians now rush in where parents and professors fear to tread.

Co-ed defenders of the legislation suggest that the required directives will lead to more playful sex, but methinks they sound like the lady doth protest too much. Getting verbal permission is hardly a pause that refreshes.

The image of Rhett Butler bounding up the stairway with Scarlett in his arms has thrilled generations of young women all over the world, but romance can descend to rape. In a sex-saturated popular culture, vulgarity blurs distinctions between sensuality and sex. Rap lyrics about "hos" offer ample testimony to that.

The legislators in Sacramento obviously wanted to target the out-of-control young men on campus whose drunken parties can become occasions taking advantage of comatose damsels in distress who can't say anything. But this law assumes guilt of anyone accused. "Verdict now, evidence later."

Rape is always a horrible and violent crime, but there's hardly an "epidemic" on campus that some make it to be. The number of female victims of rape or sexual assault fell 64 percent between 1995 and 2005, and declined slightly further by 2010, according to the National Crime Victimization Survey. Colleges are not more dangerous, but the California law reflects the frustration of the young at the mixed messages of license and responsibility. They are set adrift before they have learned to set comfortable boundaries for themselves.

Long gone is the likes of Ado Annie, who sang with such spirited humor in "Oklahoma!"

I'm just a girl who caint say no

I'm in a turrible fix

Jist when I orta say nix!

When a person tries to kiss a girl

I know she oughta give his face a smack

But as soon as someone kisses me

I somehow, sorta, wanna kiss him back!

Alas, not even Rodgers and Hammerstein would be brave enough to write those lyrics today.